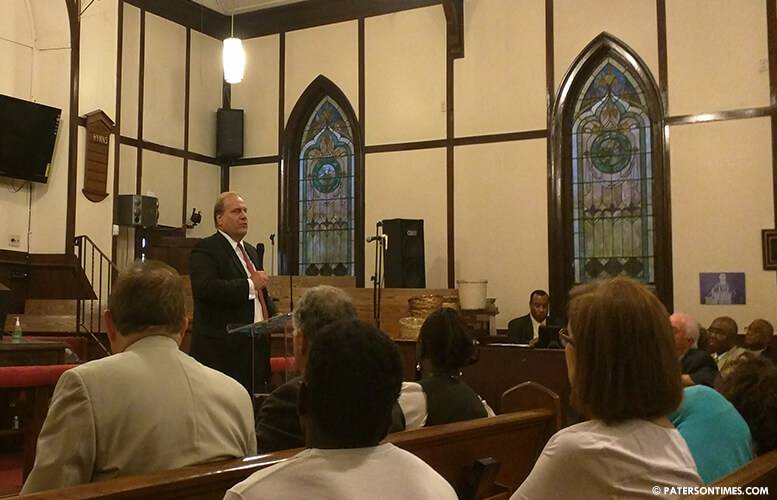 New Jersey education commissioner David Hespe during a visit to the city on Monday afternoon admitted the city’s school district is underfunded when a speaker at the historic Bethel AME Church asked him about the formula the state follows to fund local schools.

Hespe said the formula the state uses to fund districts is the School Funding Reform Act of 2008. “That law, if fully funded would provide additional resources to places like Paterson; however, in New Jersey we have a habit of not to fund our funding formula,” he said.

The funding formula was followed only half-dozen times since a modern formula was instituted in 1975, said the commissioner. “We probably fully funded the formula around five or six times. That’s not very good track record for 40 years.”

Hespe said the amount of money a district gets is determined by the governor and the legislature.  “It’s been frozen now for four years,” he said of the funding. “If it was unfrozen I think additional resources would come to Paterson.”

“Absolutely if you look at the school funding formula — without a doubt,” responded Hespe.

School board president Jonathan Hodges has repeatedly charged the state has been “illegally” underfunding city schools.

Hodges was not present in Monday’s tour.  He said he realized he had received an invitation just an hour or so before the tour began.

“Of course it would,” said Hodges when told Hespe said the district would receive more money if the state fully funded the school funding formula.

City schools have been underfunded by $173.8 million over the past six years, according to the Education Law Center and the Paterson Education Fund. The school district faces a snowballing deficit of $186 million by 2019, according to an auditor report.

The district’s financial picture took a further hit this month as the district enrolled 700 additional students that led to overcrowded classrooms and a need to hire more teachers. Some school board members suggested appealing to the state’s department of education for assistance. When asked whether any aid can be expected from the state, Hespe replied in the negative.

“Appealing isn’t going to be helpful at this moment in time because there’s no money,” said Hespe. He said the annual appropriations for all New Jersey school districts was set by the governor and the legislature in June.

“What is supposed to happen to them?” asked Hodges referring to the 700 students. “It’s the state’s responsibility to educate the kids and they are in charge.”

Hespe said half of the former Abbott districts have witnessed increases in enrollment.

The commissioner took questions from several speakers at the church after a four-hour tour of city public schools which included Silk City Academy and the Community Charter School of Paterson on Ellison Street.

Hespe visited the city at the invitation of pastor Michael McDuffie, who touted a school-community partnership to better local schools.

McDuffie’s IAAM Initiative connects neighborhood churches and schools through an adopt-a-school program, he said. “No one can do anything by themselves because if you could do by yourself it would have been done by now,” said McDuffie. “If we come together we can create a culture of education.”

Gina Johnson, a counselor at School 6, counseling for students following the violent death of a classmate. She said over the past decade 12 student who attended her school suffered violent deaths leaving others students traumatized.

“Several of our children have been killed due to environmental violence,” said Johnson. “Our children are traumatized due to no fault of their own.”

Stated-appointed state superintendent Donnie Evans said the district has a crisis response team. He also said full service community schools are equipped with ample resources including counselors to assist students through the grief that follows the death of a classmate.

McDuffie who champions a collaborative community based method to solving societal problems suggested a meeting between Johnson, Davis, and freeholder Theodore “TJ” Best to potentially create a county wide crisis response unit. Best was present at the gathering which included roughly 75 people.

Evans praised McDuffie’s work with city schools. Both Evans and Hespe said they think the pastor’s initiatives are bearing fruit.