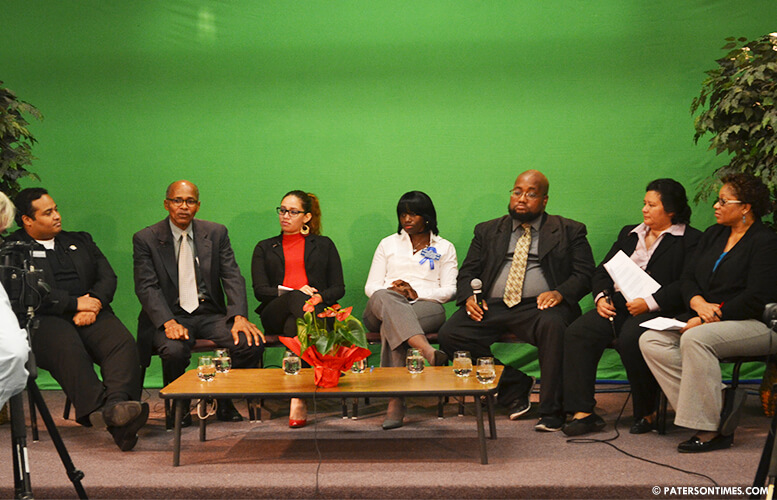 Five of the six candidates vying for the three up-for-grabs school board seats discussed parental engagement, local control, unwelcoming school environment, and underfunding of the city’s public schools at a forum organized by the Paterson Education Fund in John F. Kennedy High School on Monday evening.

The first question focused on local control and the steps each of the candidates will take to meet the state’s Quality Single Accountability Continuum (QSAC) standards to regain local control.

“The board has some partial control, but not the control we need to make significant changes when it comes to our children’s education,” answered Jesus Castro. He said he will work with the state-appointed district superintendent and the state to regain local control the city lost in 1991.

Errol Kerr, incumbent, said until very recently, there was no procedures in place to regain control of the school system. Having been on the board for more than nine years, Kerr said the standards are “subjective.” He cited fiscal management – an area where the district scored above 80-percent (the threshold to gain local control). “We were never given credit for it,” he said.

Kerr said it was imperative for the district to meet the QSAC standards, but noted community action is necessary as well. “We’ve been doing good. We just need the community to start rallying,” said Kerr.

The district gained control over operations in June 2014.

Oshin Castillo said the district needs to do better on its New Jersey standardized exams if it ever hopes to regain local control. She too concurred with Kerr that residents need to rally around the school board and organize.

“I’d focus on the current things we have so far. We have operations,” said Nakima Redmon. She suggested a piece meal approach to obtaining local control. She said her aim would be to obtain control over personnel.

“We’re much closer as a board in regaining local control,” said Corey Teague, incumbent. He suggested putting pressure on both the state and the superintendent.

“The state has essentially failed our district because it’s been in control,” said Teague. The district was taken over by the state for failing to educate city students; however, advocates say New Jersey has failed to significantly improve the district or provide a better education to the city’s young people.

Nelly Celi, former school board candidate and resident, who served as the questioner at the forum, asked what each of the candidates will do to encourage more parental involvement. She cited the unwelcoming environment most parents are faced with when visiting a school or the district offices.

Castillo, who grew up in a Spanish-speaking household, pointed to language barrier that prevents parents from being involved in their student’s education. She suggested ensuring schools have someone to speak to parents who may not speak English.

There are many young parents in the city, said Castillo, who the district needs to engage with in order to improve parent participation. Castillo, 24, said there are parents her age, who can be targeted and encouraged to participate in their child’s education. “Those young parents are essential because they just came out of high school,” said Castillo.

However, she said some of them fear being involved. She suggested providing them with training to attend report card night, back to school night, and board meetings.

Redmon suggested an after school workshop for parents and students to teach both about the curriculum. She said with a good understanding of the curriculum the parents will be better able to help their children with homework.

Although many candidates focused on getting parents engaged, Teague honed in on the poor customer service the district provides to parents. “There’s been many instances where the initial response from the person at the desk was not welcoming or inviting,” said Teague.

Teague said the district’s security staff need better training on how to treat parents who make an effort to get involved. He said when parents are faced with mean speaking security guard they are often discouraged and may not bother to get involved.

Security guards, even at central office, speak down to parents, said Teague.

“The first person you meet when you walk into the building will set the tone for how you feel throughout the rest of the time you’re in a building,” said Teague. He said he has been visiting schools, speaking to parents, and complaining to state-appointed district superintendent Donnie Evans to improve customer service.

“As a board member I will continue to get on their nerves and be as aggravating as a bill collector until they get the message that they need to be more inviting when parents come in,” said Teague.

Castro said some parents may not get involved because they have to hold more than one job or there may be other issues at home. He also mentioned cultural differences that prevent parents from coming out during school events like report card night.

Castro called for a more diverse teaching body, one that is aligned with the city’s multicultural makeup.

Kerr said the district’s budget appropriates very little money for parental engagement. He also said some parents avoid being involved in their children’s education. “You have parents who are never meeting the teachers of students,” said Kerr.

Celi asked what the prospective board members will do to address underfunding of the school district. City schools have been underfunded by $173.8 million over the past six years, according to the Education Law Center and the Paterson Education Fund.

“You can’t cut our programs that are working,” said Castillo. She said the district ought to cut ineffective programs while advocates and board members attempt to secure more state funding.

The candidates uniformly said city residents, advocates, and board members need to do more to lobby for more funding from the state. “You’re not giving us a chance to educate our children,” said Redmon when asked about the state’s underfunding of local schools.

Teague suggested renting a charter bus, filling it up with residents, and take them to Trenton during the budget meetings to demand more funding for city schools. “We need to do that until we get the response we want,” said Teague. “They really don’t think we care as a community.”

“There have been protests,” said Castro. He didn’t think protesting would get the district more funding. “We’ve been doing the same thing year after year.”

Kerr said board members need to campaign to inform parents about the underfunding. He said the underfunding has resulted in more than 10-percent cut per school. He said there’s a misperception amongst city residents that the district has enough funds to educate its student when in fact it doesn’t.

“We’re getting flat funded year after year,” said Kerr. He said the district doesn’t have money to support the arts or athletics.

Making time for board business

The final question of the night was whether the candidates have sufficient time to devote to board and committee meetings.

The five candidates present said they will make time to attend both committee and board meetings.

When he was first elected on the board, Teague said it was difficult for him to make it to meetings with two school age children, but he creatively adjusted his schedule to ensure he was present during deliberations.

The forum moderated by Rosa Grant, executive director of the Paterson Education Fund, was attended by about a dozen people.

Kevin Michael Henry, a candidate for school board, was invited by the forum’s organizers, but he did not attend.

City residents will elect three of the candidates to the board of education on November 3rd, 2015.