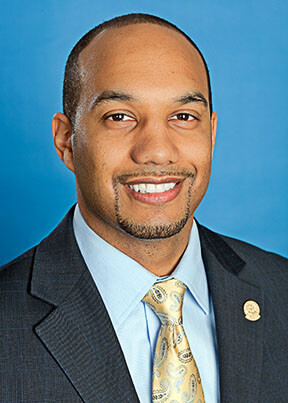 State-appointed district superintendent Donnie Evans is promoting freeholder Theodore “TJ” Best to a new post that comes with a $23,330 pay increase which was approved by the New Jersey Department of Education earlier in the month.

Some school board members criticized the superintendent for increasing Best’s salary from 78,030 to $101,360 at a time when the district has been in dire financial straits. The promotion results in a 30-percent pay increase for Best.

“There’s no way I can justify that,” said school board member Corey Teague. He cited the layoff of 363 employees at the end of the last school year due to a massive budget shortfall. Teague levied harsh criticism against Evans asserting the superintendent “hid” the appointment from the board.

Teague said the promotion was never presented to the board.

District spokeswoman Terry Corallo on Monday said Best has not yet been promoted nor has his title changed.

The superintendent obtains approval from the state prior to presenting promotions and title changes to the board of education, said officials. The New Jersey Department of Education approved the promotion on November 6th, 2015.

Corallo on Tuesday said the information will now be presented to the board’s personnel committee.

As superintendent in a state-controlled district Evans has the ultimate authority to appoint and remove staff members. It has been his wont to abide by the decisions of the advisory nine-member board of education.

“I wasn’t aware of the amount,” said school board member Flavio Rivera. He said Best deserves the pay increase for having taken on added responsibilities in the past year without receiving additional pay.

“He has been assigned other duties for a year and he hasn’t been compensated for it. I don’t think that’s fair,” said Rivera.

Christopher Irving, school board member, praised Best for playing an integral role in securing local control over operations. Best in his previous role as supervisor of special projects focused on regaining local control of the district through the Quality Single Accountability Continuum (QSAC) process.

School board president Jonathan Hodges thought the timing of the promotion was off.

“We just laid off 363 people,” said Hodges. “I didn’t think it was appropriate to install any administrator with this kind of salary increase in the face of this.”

Corallo would not say what Best’s new title would be or what new responsibilities he would take on. His previous title was interim supervisor of culture and climate. Best ensured the district’s compliance with New Jersey’s anti-bullying laws.

Best will handle the responsibilities that were handled by Cheryl Coy who served as manager of non-traditional programs. She handled student attendance and truancy both of which will now be managed by Best.

Coy also saw a 30-percent salary increase after she was promoted.

Whereas the district would have had to hire another individual – possibly at $86,000 salary – to handle Coy’s prior responsibilities the district is handing those duties to Best with a $23,330 pay increase.

Best said the district is saving a considerable amount of money by not hiring an additional administrator. Accounting for salary and benefits the district will save $110,000, he said.

Best has been employed by the district for the past three years. He has been a Passaic County freeholder since 2011.

“I’m not in favor of all these high salaries, but what’s fair for one should be fair for others,” said Rivera. Many district administrators saw their salaries increase when they took on additional responsibilities, said Rivera, but that was not the case with Best.

“I don’t encourage the district to be giving increases, but he deserves it. He’s been doing his job,” said Rivera.