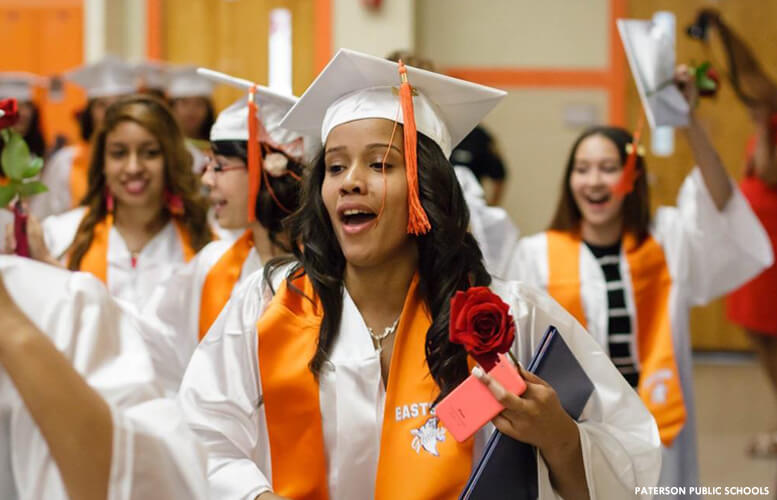 Over the past half-decade the city’s school district has been steadily improving its graduation rate to reach a new high of 78.2-percent this year, according to district data.

Out of the city’s 13 high schools Rosa Parks School of Fine and Performing Arts and Harp Academy registered the highest graduation rates this year. 100-percent of seniors graduated from both high schools, according to the district.

Science, Technology, Engineering, and Mathematics (STEM) at John F. Kennedy High School had the third highest graduation rate at 86.3-percent, according to the district. 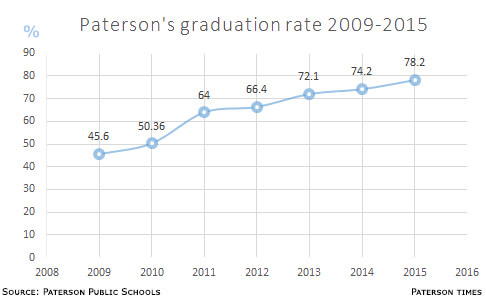 The district has come a long way from a 45.6-percent graduation rate in 2009. Since then, there have been steady improvements every successive year, culminating in a 78.2-percent high school graduation rate this year.

“This is tremendous progress and the result of a major initiative to dramatically improve our high schools across the district,” said state-appointed district superintendent Donnie Evans. “I am deeply appreciative of the work of our teachers and principals.”

I’m extremely pleased two of our schools achieved 100-percent graduation rate, but we will not be satisfied until all of our high schools achieve the same, said Evans.

Hodges said the graduation rate improvement stemmed from the dismantling of comprehensive high schools to small academies. He said the smaller environments improved attendance while cultivating students’ interest in the area of study.

“I’m sure that helped,” said Rosie Grant, executive director of the Paterson Education Fund, concurring with Hodges, but added that there have been a collective effort by a number of community organizations to see improvement in graduation rate.

The fund for example has been running its College Track Program and the Paterson Pathways Program both of which encourage students to finish high school to attend college. These programs run by the fund and other organizations aim to create a “college going culture,” said Grant.

“We’re on a good upward trend. We have to be careful though and not think we’re there because we still have a good way to go. This is promising,” said Grant.

The school board president said the district’s focus on teaching to the test which equipped students with the skills to score high marks on state exams has also allowed the schools to graduate more high school students. He also said the district’s investment in teachers and principals through professional development assisted in boosting the graduation rate.

Hodges worried the state’s flat funding of the district and recent budget cuts may reverse some of the gains that have been made over the past six years.

Despite the increasing graduation rate, in 2014 less than 20 students were deemed “college ready” based on SAT scores by the College Board.

“I wouldn’t hold up our graduation rate against the SAT scores because they are two different things. And they are measuring two different things,” said Grant. “We’re putting less and less credence on the SAT.” She said colleges are increasingly relying on other metrics to measure whether a student will be successful in college.

“We’re not where we need to be,” said Hodges. The district is increasing its rigor to better prepare students for college, he said. There has been a push to set higher expectations and higher academic standards at city schools.

The district is hoping to launch the prestigious Swiss program International Baccalaureate at International High School in 2017. The program is known internationally for academic rigor and its mission to cultivate world citizens.

“High school graduation is a very important milestone; but our mission continues to be preparing all students for success in college and career,” said Evans.