Paterson school superintendent: ‘We will not be furloughing’ | Paterson Times 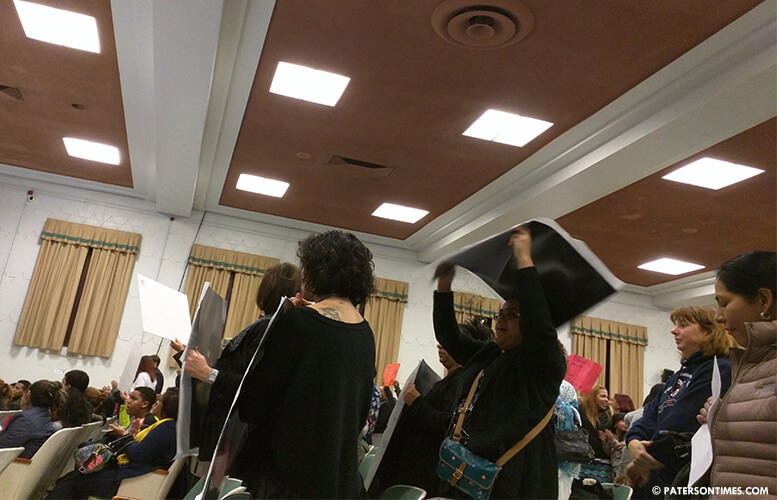 State-appointed district superintendent Donnie Evans ruled out any plans to furlough district employees in front of a large crowd of teachers who gathered in protest inside John F. Kennedy High School auditorium on Wednesday evening.

“We will not be furloughing,” said Evans. He said furlough was among a range of options district officials were looking at to balance the school budget next year. “Take my word for it, we’re not going to furlough,” he repeated.

Evans said the furlough idea emerged in a brainstorming session. The idea was mentioned at a legislative hearing by business administrator Daisy Ayala on Tuesday and received widespread criticism from the city’s teachers union and education advocates.

Evans said his business administrator’s comments were taken out of context in media reports.

“I was there. I heard it with my own ears,” said Charles Ferrer, first-vice president at the Paterson Education Association, the teachers union. He suggested the furloughing was being considered, for he said, no one was pressing the business administrator for that answer at the committee hearing, but that it was freely uttered.

Ayala indicated a furlough would impact all district employees.

School board president Jonathan Hodges found fault with the way the district was portrayed as being unprepared to assume local control. “It appeared this district was less ready to return to local control than some of the other district. I really have a problem with that characterization,” he said.

Hodges said the city’s school district is much readier than other state-operated districts in New Jersey to regain local control. The state has returned control over operations and an expedited review is underway to return other areas to local school board control, according to district officials.

Evans cited the year-over-year increase in graduation rate that has climbed from under 50-percent six years ago to close to 80-percent this year.

The large number of sign wielding teachers who gathered inside the high school auditorium cheered when the superintendent declared the district will not impose furloughs on its employees.

Evans said the district is looking at a number of options to figure out how to balance its budget. The district faces an escalating $186 million deficit by 2019, according to projections.