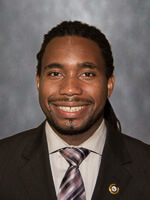 School board members on Wednesday evening selected Christopher Irving as their president. Irving was unopposed as seven board of education members voted to pick him for president at the re-organization meeting in John F. Kennedy High School.

“Please know your electing me as president of this group, I think is an endorsement of our ability to work together to continue to turn our board to local control,” said Irving. He then nominated Chrystal Cleaves for the vice-presidency.

Outgoing school board president Jonathan Hodges was not present at Wednesday’s re-organization meeting.

The meeting was much different from last year’s first meeting of the year in which Hodges was selected to lead the board. The former president forged a consensus that won over then newly elected school board member Lilisa Mimms and Kenneth Simmons, an Irving ally, leading to a surprise vote that propelled Hodges to the presidency.

Two of Hodges’ close allies Corey Teague and Errol Kerr suffered defeat in the November elections. Nakima Redmon and Oshin Castillo, who won seats two months ago, were sworn in last night, and both voted for Irving.

Kevin Michael Henry could not take the oath of office after a New Jersey Department of Education background check turned up criminal records which disqualified him from getting on the board.

Henry’s convictions go back to 1991. He has said he served his time and since then reformed himself and became a contributing member of society. He runs a reentry program to help those coming out of prison with employment and services.

“I know all of us up here have the best interest of all of the students of the City of Paterson. We will do a great job ensuring they get above and beyond what’s due to them,” said Cleaves.