For the past three years the city’s high school dropout rate has held steady at 10-percent after a big drop in 2011, according to a district report submitted to the state.

“I think that we are able to keep it at ten percent is remarkable given the fact we are being underfunded by $72 million a year,” said Jonathan Hodges, school board member. “In that kind of a budget atmosphere you are doing less and less. So any kind of stabilization in data means there’s actually an improvement because we’re not able to do the same things with less money.”

10.2-percent represents 162 students who dropped out of high school. “That’s interesting,” said Linda Reid, head of the Parent Education Organizing Council for Paterson, of the dropout rate. “So who is graduating if we got this high percentage of kids dropping out?” she asked referring to the district’s much celebrated 78.2-percent graduation rate. 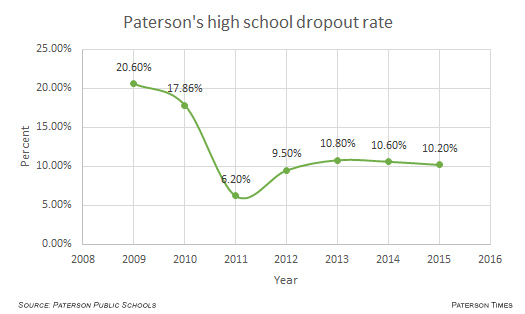 District spokeswoman Terry Corallo pointed out that the dropout rate has been significantly reduced since 2009. In fact, the district’s dropout rate in 2009 was 20.60-percent. The next year it dropped to 17.86-percent, according to the district’s statistics.

It climbed back up to 9.5-percent the next year, according to the district.

“You have a decrease in dropout rate because kids were allowed to choose what they wanted to pursue,” said Hodges. He said the academies which focus on themes such as engineering, information technology, architecture, performing arts, and so forth serve as “anti-dropout programs” in the district.

“So what are they doing about those kids dropping out?” asked Reid. The district has credit recovery programs including its Twilight School program which allows students to attend school in non-traditional hours to earn the needed credits to progress to the next grade.

The district planned to open an online school at a city-owned building on Ellison Street in late 2014 to help dropouts obtain diplomas by completing online courses. Hodges at the time worried the online program, which have come under fire elsewhere in the country for providing substandard education, would equip students with useless diplomas.

District officials have told the school board the program would offer blended instructions to students. School board members did not get sufficient information about the costs associated with running the school for dropouts also known as the district’s Extended Learning School which forced them to postpone approving the program.

Corallo said the Extended Learning School was put on hold, but indicated the district will soon revive the school.