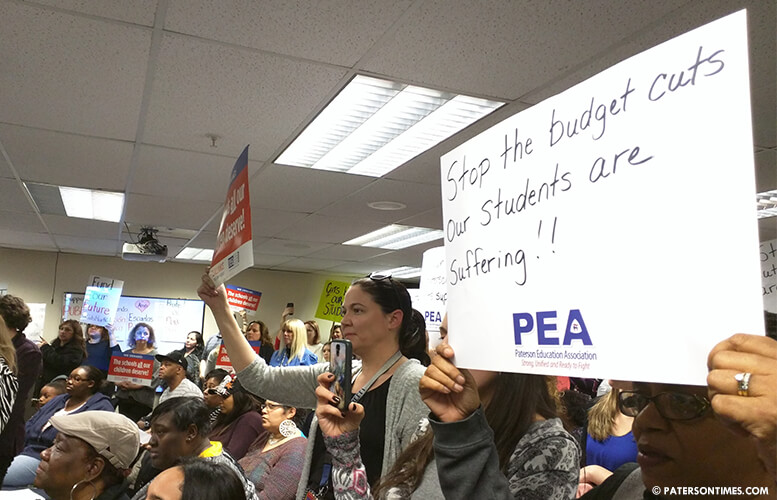 A massive crowd of teachers, parents, and community leaders flooded the school district’s central office on Monday night to rally against the impending $45 million in budget cuts that many have said will devastate the city’s public schools.

Demonstrators held up protest signs “Cuts hurt our kids” and “Protect our public schools” and “Fund our schools” as they took turns to speak at the special meeting held to discuss how to go about balancing a $483 million school budget with a reduced $38 million gap.

The speakers lambasted the state for not providing enough education funding to the district while expressing great worry about the impacts a 10-percent budget reduction will have on students.

“This $45 million dollar cut will be the end of us,” said Donna Cleary, mother of a School 9 student. She said the last round of cuts left her school with substitute teachers teaching classes rather than certified teachers.

Naomi Gamorra, a School 21 teacher, said students in her school have gone without instruction for the first marking period. She said many classes without certified teachers were manned by substitute teachers.

Gamorra repeatedly fought for her students at several board meetings to fill the vacancies at her school.

“You now want to cut our children’s future even more,” said Cleary.

“We cannot continue to allow our children to be robbed of an education,” said Bobby Faison, whose two children attend the city’s public schools.

“Any cuts to an already lean school system would be catastrophic,” said Mercedes Davidson, a School 3 resource teacher. She said teachers are working with little supplies, students have scant access to libraries, and lack programs that enhance learning.

“How much more can our students withstand without their education becoming sub-standard?” asked Davidson.

The large number — hundreds — of demonstrators at the central office prompted the district’s security to turn away some of the protesters. The scene at the district’s headquarter was much different from what had transpired last year when layoffs claimed more than 300 employees.

“This is an emergency that we cannot let slide by that slid by last year,” said assemblyman Benjie Wimberly. “This is a fight you have to take to Trenton. There’s a man named Chris Christie that needs to hear loud and clear the city of Paterson cares about their children and cares about their future.”

John McEntee, president of the Paterson Education Association, teachers union, said the state has underfunded the district to the tune of $173.8 million over the past six years.

“Last year, the state of New Jersey failed when they laid off 300 of our employees,” said McEntee. “The ripple effects of these cuts have hurt all of our children in the school district.

McEntee said class sizes have exploded in many schools. He said he found as many as 34 students in some classrooms with just one teacher.

“It’s a horrible plot and plan to destroy our children,” said Kenneth Clayton, the president of the city’s chapter of the National Association for the Advancement of Colored People (NAACP).

This year, the district will potentially close three schools – School 11, St. Mary’s Early Learning Center, and the Alternative Middle School – to create $2.87 million worth of savings. It may also reduce services – maintenance contracts, courtesy bussing, transportation, overtime, and substitutes – to save $9.5 million.

The district will potentially eliminate all individual consultants to save $2.26 million. “I’m happy to see the consultants will go,” said Christopher Irving, school board president.

It’s also looking to cut vacancies to save $1.5 million. It may also save $694,950 through moves, retirements, and resignations.

Board member Errol Kerr said the school board create the in-house legal department because it was shelling out millions of dollars in legal costs.

“I don’t think we should be doing that,” said Hodges about eliminating the legal department.

It may also cut one athletic program, merge job descriptions, reduce professional development, and get rid of stipends to save $7.5 million.

“We’ve looked at a lot of different options. The schools are the last place I’ll look. We cut there seriously last year,” said state-appointed district superintendent Donnie Evans. However, he noted there may be “minimal” cuts to the individual schools.

An audience member yelled out “Salary cuts! Starting with you Mr. Evans!”

“Slowly, but surely, we’re falling apart. What does it look like for Paterson? A grave yard for our kids,” said Nikki Baker, an instructional aide, citing the senseless violence on city streets that some say is a result of a broken education system. “These kids are struggling. It hurts all of our hearts when we see budget cuts.”