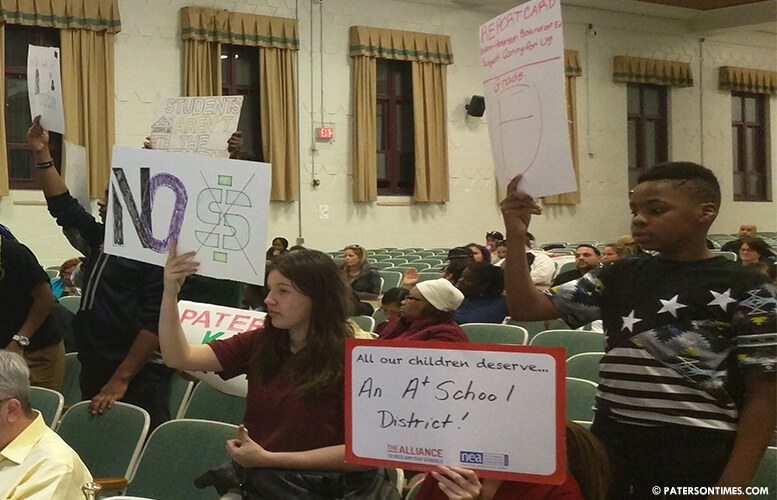 The city’s school district proposes to cut 115 positions to reduce a massive budget deficit that has resulted in tumultuous meetings with teachers, parents, students, and community leaders protesting the state-operated district’s move to cut education and increase the school levy.

82 of those positions are in the central office while 33 are school level, according to district records. $10.3 million in salaries and benefits will be saved through the new wave of staff reduction, reckons the district.

But those cuts are not enough to close a $45 million budget shortfall that has been reduced to $38 million. State-appointed district superintendent Donnie Evans has proposed a list of potential cuts to slash the budget deep enough to generate savings that include closing schools, combing the John F. Kennedy and Eastside High Schools sports teams, eliminating a number of consulting contracts, and eliminating courtesy bussing.

School board member Jonathan Hodges vehemently opposed closing any schools in the district. He said closed down schools will invite more charter schools into the Silk City further impoverishing the public schools.

Hodges said closing down schools also sends the wrong message to the state. He said the city has been able to obtain school projects in the city by arguing the schools are overcrowded and antiquated.

“If you voluntarily shut down schools where’s your argument?” asked Hodges. A contingent of parents and education advocates lobbied the state for four years – using overcrowding and antiquated facilities as their premise – to receive School 16 and the Hazel-Marshall School which are expected to come online in the next school year.

“It makes no sense to close schools,” said Hodges.

Hodges wanted the school board to reach a consensus not to close schools; however, school board president Christopher Irving disagreed. Irving did not see a way to close the budget gap without closing down school buildings.

Irving said the board also could not pass a resolution to prevent the closing of schools without seeing the budget.

Other board members assailed the superintendent and his staff for not presenting a budget document.

Simmons and his colleagues were expected to vote on a summary budget on Monday evening.

“I can’t make recommendation if I don’t have the full budget,” said Simmons.

“You have the summary of the budget,” responded business administrator Daisy Ayala.

“The summary is not good enough,” said Simmons.

Ayala said the budget has been submitted to the county superintendent of school for review. She said once he reviews it, the school board will be provided with the budget.

The more than 150 people at the John F. Kennedy High School auditorium grew impatient at the exchanges between the superintendent, his staff, and board members.

Flavio Rivera, who is the chairman of the fiscal committee, said he has yet to see the district’s budget. “It’s just poor planning,” he said as the superintendent and his staff members attempted to tell board members the board will receive the budget after the county superintendent reviews and returns it to the district.

“You’re never prepared that’s how you fail our kids!” yelled out Elizabeth Elias, the mother of three students, who attend school 21 and Rosa Parks High School.

Alarmed parents have attended three meetings to find out what lies ahead for the school system. Many expressed great frustration at the lack of information.

“You should be ashamed. Let’s give him an F,” shouted Valerie Freeman, a parent, taking aim at the superintendent.

Parents gathered in droves to find out the negative consequences that will follow the “draconian” cuts to the district. Homeowners gathered to see whether the reduced $5 million school levy hike is still in the budget.

Without a budget document both groups were unsatisfied.

The 10-percent reduction in the district’s 477.48 million budget (school year 2015-16) will decimate the district, said board members.

“It will totally stifle the future educational development of our district,” said Kerr.

Luis Dominguez, a senior at the School of Architecture and Construction Trades at John F. Kennedy High School, said he is worried the cuts will impact his two brothers, who will likely attend the same high school.

There were dozens of school children who attended the board meeting to fight for their education.

“I want to go somewhere,” said Jesskomar Gargot, 10th grader at the Science, Technology, Engineering, and Mathematics Academy at John F. Kennedy High School. “How am I supposed to dream?”