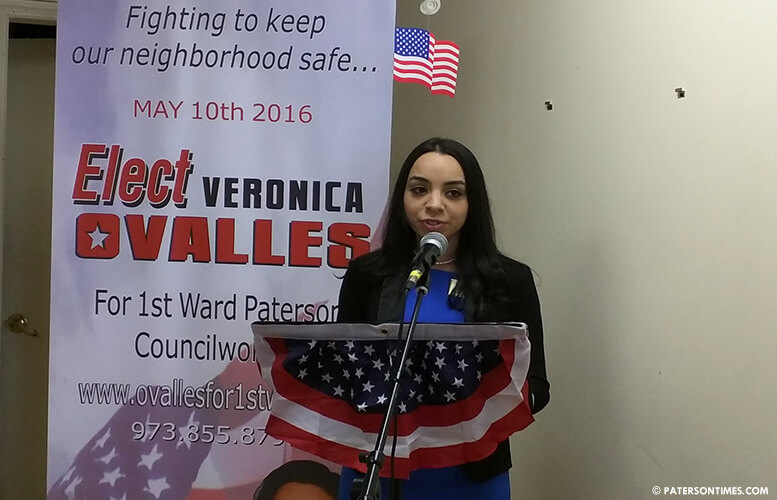 After badly losing a bid for the 1st Ward council seat late last year, Veronica Ovalles has assembled a new campaign team to challenge incumbent councilman Michael Jackson for the seat in the May municipal elections.

“Our 1st Ward council members over the years have not done right by the people,” said Ovalles at her Broadway campaign headquarter in front of about a dozen supporters on Saturday afternoon. She referred to former disgraced 1st Ward councilman Anthony Davis and the incumbent.

Ovalles assailed Jackson for a series of votes he cast on temporary budgets and the recent budget amendments.

“The current 1st Ward councilman continues to vote to raise taxes when he’s not even paying his,” added former school board member Corey Teague, who supports Ovalles, referring to Jackson’s $38,000 in owed property taxes.

“I will work to end high taxes. I won’t vote for tax increases without making the necessary budget cuts,” said Ovalles. She later clarified she would oppose any new tax increases on property owners. “It’s already very high as it is,” she said.

Jackson is a staunch backer of mayor Jose “Joey” Torres’ budget which contains a 6.1-percent tax increases and forced a government shutdown when the majority of council members rejected the administration’s budget amendments.

“We need change,” said Ligely Pagan, a senior citizen who resides on Belmont Avenue. “I’m even scared of going out at night.”

Pagan said she is afraid to leave her home even though she drives. Ovalles said she plans to make the streets safer by working with residents and the police department.

Council members have very little authority to direct police attention to a given neighborhood or area. In 2014, the council adopted a business curfew ordinance, which allows the council to designate high crime areas based on crime statistics for increased police presence, to improve quality-of-life.

The ordinance has reduced non-fatal shootings in the 15 designated crime zones by 79-percent, according to police data.

“I don’t buy the statistics,” said Ovalles. She said she is not in favor of the business curfew unless it covers the entire city. It is “unfair” to businesses when they are targeted based on their location, she said.

Ovalles said residents she has been meeting while campaigning have been complaining about the high crime in the city. She also discussed other positions she has taken on issues.

For instance, Ovalles said she is opposed to long-term tax abatements. The 1st Ward has one pending tax abatement coming up on Godwin Street. The council rejected a tax abatement for the Cooke and Hamilton apartments in late February.

“I believe she’ll do the right thing for the city,” said former city police officer Mohammad Mahmoud, who provided Ovalles her campaign headquarter.

Mahmoud said he owns several properties in the 1st Ward and has real concerns about the tax increases. He said the headquarters located in a storefront at 102 Broadway fetched $2,200 in monthly rent prior to it being donated to Ovalles’ campaign.

Ovalles came in last place in the five-person November special election last year. Alveria Spencer, who withdrew from the race, finished ahead of Ovalles in that race. This second run is much different than last year’s disorganized run, according to her campaign.

“She was new,” said Alvaro Granados, owner of One Day Bail Bonds, who is supporting her run. “She has made more contacts. Now that she’s better known she has a better chance.”