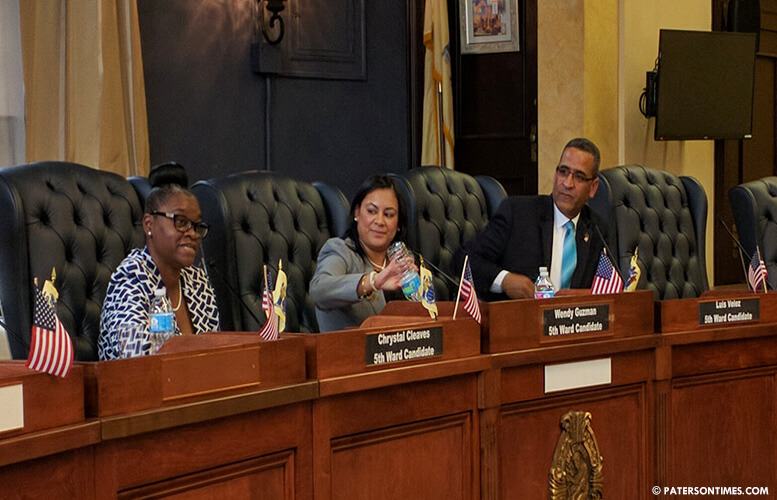 The three candidates seeking to succeed incumbent councilman Julio Tavarez – only current office holder forgoing re-election bid – criticized his performance representing the 5th Ward at a candidate forum in City Hall on Friday while debating the future of the Paterson Armory, the recent budget vote, the Sandy Hill business district, and the administration’s performance in addressing the city’s abandoned properties problem.

“It’s not easy to talk about someone when they are not present to defend themselves,” said Chrystal Cleaves. In his first term Tavarez did a “commendable job,” she said.

“He has not represented us in the past couple of years,” said Cleaves. “He did not follow through with all of his responsibilities. He didn’t do the job he was elected to do.”

Luis Velez said there has been a “lack of leadership” since 2012. He criticized the incumbent during the forum for poor attendance. I have attended more council meetings than the sitting councilman, said Velez.

“I will not speak badly of him as a person,” said Guzman, a close friend of the incumbent. “In the past two years, he has not been visible in the 5th Ward. As a councilman he knows he let our 5th Ward down. And I believe that’s why he made the decision not to run for re-election.”

The three individuals running to succeed Tavarez appeared to agree with his recent budget vote when asked how they would have voted on the fiscal year 2016 budget which included a 5.8-percent tax increase.

“I would have been one to oppose the budget,” said Guzman. She said the city needs to end temporary budgets and get off transitional aid.

“I will not vote for a tax hike,” said Velez.

“My vote would have been no,” said Cleaves.

Velez said he did not want to give an A or F score to the Torres administration.

“We need to continue assessing it,” said Guzman.

“I don’t think the current administration is doing its due diligence with the abandoned properties. We probably have more now than previous years,” said Cleaves.

Cleaves said the administration needs to present a better plan. She said the current plan, approved by the governing body in summer of 2014, is not working.

The three candidates agreed the city should continue building more affordable housing units which Tavarez opposed for fear of concentrating poverty in one of New Jersey’s poorest cities.

“When did he say yes in his life?” remarked Velez. “We need to support low-income people to have a decent place to live.”

When asked what the city should do to increase the municipality’s 27.3-percent homeownership rate which is less than half of New Jersey’s 65-percent, Velez, Guzman, and Cleaves provided differing answers.

“A lot of people don’t want to be homeowners,” said Cleaves. She said the city needs to do more to keep the current homeowners in their homes. “The city can’t make you a homeowner,” she said.

Guzman said the city should hold seminars to provide homeownership information to residents. “We need to inform them about how they can become homeowners,” she said. Credit counseling and duties of homeownership should be covered in the seminar, said Guzman.

The candidates also provided differing answers when asked about the business curfew ordinance.

The hotspot business curfew ordinance has been successful in reducing non-fatal shootings in designated area, according to police.

Non-fatal shootings have dropped 79-percent in hotspot zones, according to police data.

Velez and Cleaves did not provide a direct answer whether they support or opposes the business curfew.

All three candidates opposed the Sandy Hill business district which was created by the city council in 2014; however, the district has yet to receive a budget.

“I was against it,” said Velez. “I will only approve a SID that’s only commercial.”

Guzman and Cleaves said they would not support a business district that will increase taxes on homeowners.

Cleaves and Guzman said they would like to see the Paterson Armory turned into a recreation center.

“I’d like to see there a recreation center,” said Guzman. “We need to knock on the doors of corporations.”

“I’ve seen the plans for the Armory. They probably haven’t seen them because they probably don’t have the involvement that I have,” said Velez. He said the plan includes a mix of residential and commercial space with parking.

Velez said he wants to see a police substation at the location.

Both Guzman and Cleaves rebutted Velez’s answer for characterizing them as uninvolved. Velez said he spoke to “inspectors” at the site to figure there will be mixed use building at the site.

Mayor Jose “Joey” Torres’ administration has not made public any plans for the site after borrowing $1.1 million to demolish and preserve a portion of the historic structure fronting Market Street.

While the three candidates spent most of their time discussing city issues, they were asked about the district’s newcomers program.

“I do not agree about keeping the newcomer program at School 11. School 11 is not a safe school,” said Guzman.

Guzman said the students are enclosed at the newcomer school. She said at School 16 they would have had a chance to work with other students on projects and school work. The school is designed for new immigrants to the U.S.

Velez said the city needs more funding from the state to provide better facilities. He thought the program should have been moved to School 16.

“Yes, we need to continue to fight the Department of Education,” agreed Cleaves. However, she disagreed about moving the newcomers program to the new School 16.

“School 16 is being built in a community. It should be for the community children,” said Cleaves. “The children there have been displaced for years because their school was torn down. Let’s get these children back into their community school.”