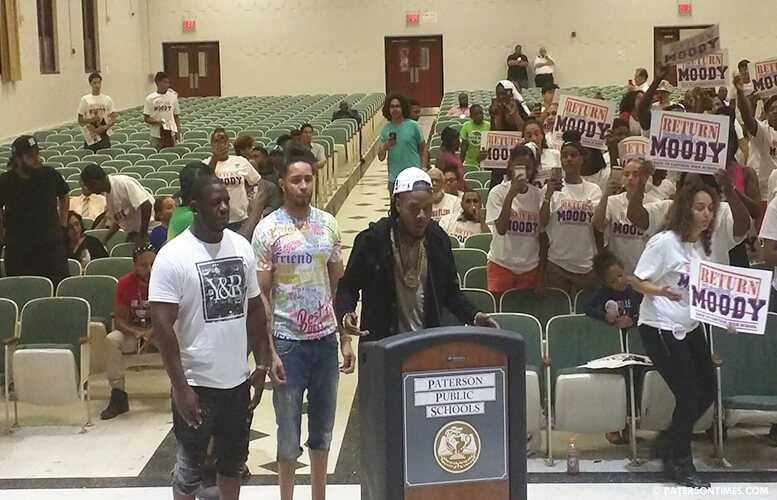 Rapper Fetty Wap apologized to the city on Wednesday night for the controversy stoked by a music video he filmed at Eastside High School that resulted in the suspension of a school principal.

“If I disrespected anybody I came here to apologize,” said Wap to the superintendent and school board at the meeting held inside the auditorium of John F. Kennedy High School. “I apologize to Paterson.”

“All I did was what I know,” said Wap. Wap, whose real name is Willie Maxwell, attended School 6 and Eastside High School. He returned to Eastside High School to film the video which celebrates his meteoric rise from a dropout to a chart topping singer and songwriter.

His video also features drugs, alcohol, and an anti-education message earning criticism from parents and education officials. The ensuing controversy resulted in the suspension of Eastside High School principal of operations Zatiti Moody two weeks ago.

State-appointed district superintendent Donnie Evans placed Moody on paid suspension pending an investigation to determine whether all district procedures were followed in granting permission to film inside the school building.

More than 100 people wearing “Return Principal Moody back to Eastside High School” t-shirts protested the suspension at the board meeting.

“Each individual in this school know right from wrong. They know fiction and they know reality. They are not going to let a video distort their thinking. They know it’s just a video,” said Rahshon Dixon, a community activist, who founded the Street Keepers group.

Dixon said Moody was instrumental in helping him return to a normal life after 12 years of prison.

“I used to be a violent kid. I used to fight all the time. All the teachers used to look to suspend me. Nobody took the time to talk to me to know why I used to do the things I used to do. But then, when Mr. Moody got there things changed. I thank God for Mr. Moody,” said Luis Francisco, who graduated from Eastside High School in 2014. “It was a blessing to have Mr. Moody guide me. Now I have a career and a family. I’m not out there on the street lost.”

The protesters included former students, current students, and a number of community leaders. School board members had mixed recreation to video and the ensuing controversy.

“I have no problem with the video being shot in the classroom,” said Jonathan Hodges, school board member. He said the video should have been used to instruct students suggesting the scenes could have been utilized to discourage the behaviors portrayed in the music video.

“The overall message was I made a success by not graduating high school so you have to graduate high school,” said Hodges.

Board member Oshin Castillo said Wap was sincere in his apology. “He didn’t know what the video was going to cause,” she said.

“I can’t get specific, but just know that I hear you loud and clear,” said Evans. “I’m hoping to bring some closure very soon.”