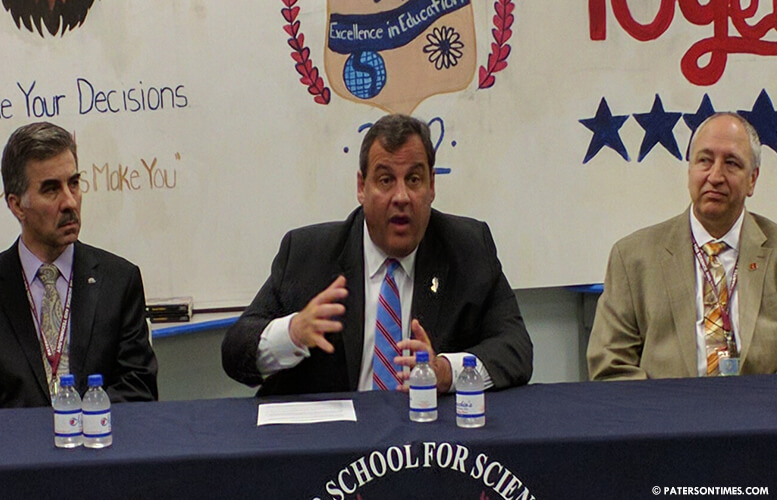 More than 150 teachers and community leaders protested governor Chris Christie’s visit to the Paterson Charter School for Science and Technology on Thursday morning in which he urged 25 mostly charter school parents to push harder for expansion of charters in Paterson.

“Parents in urban centers, you need to start standing up. You need to be the voice for this movement because at the end when I say it they say, ‘He’s Republican. He doesn’t like cities. He doesn’t care.’ I think it’s the exact opposite. I care the most,” said Christie.

More than 150 protesters in the corner of West Railway Avenue with signs shouting at the governor.

The governor mentioned the 1,300 students on the waiting list of the Paterson Charter School for Science and Technology to argue for the expansion of charters in the city.

“Those 1,300 kids are going back to failing public schools,” he said.

He promised parents to expand the footprint of charter schools in the city particularly the school on West Railway Avenue. Local leaders have criticized charter schools and the $34 million the district has to give to them every year.

Christie said the point of charter schools was to experiment and apply the lessons to public schools. He said that has not happened because of opposition from the state’s powerful teachers’ union.

“The thing that stopped it are the folks you see protesting outside. You got a bunch of people in red shirts protesting me outside, screaming and yelling at me,” said Christie. “They don’t want to change the rules. They don’t want to have longer school day or school year.”

Christie said the teachers union collects millions in dues that are then spent to oppose his school reform policies.

More than 150 teachers and community leaders marched with signs and bullhorns outside of the charter school building. Some of the teachers came from Trenton and Jersey City to protest the governor’s flat per pupil $6,599 school funding proposal.

John McEntee, president of the Paterson Education Association, slammed the governor for failing the public schools in Paterson. He said the state has had control over the school system for 25 years.

“He’s the boss of this school district,” said McEntee of the governor. “Every single person working at 90 Delaware who has a job over $150,000 that’s on him. That’s how he’s spending the money in Paterson.”

Christie’s flat funding plan will cost Paterson $238.96 million, according to the Paterson Education Fund. This will leave the district with little money to educate bilingual students and others with great needs, said school board member Jonathan Hodges, who attended the protest.

“It’s going to send our students onto the streets and prison,” said Rosie Grant, executive director of the Paterson Education Fund.

“If his plan is so good come share it with the people who live in this town not just a select few. We all want to hear from the governor. Have the courage to talk to us,” said Hodges as the governor was slipped into the charter schools while teachers shouted at him.

“Christie says cut back, we say fight back!” shouted the teachers at the governor. Many had signs, “Governor Christie fully fund our schools,” “Corruption,” and “Stop robbing Paterson children.”

“Shame on Christie for trying to sneak into town,” said Linda Reid of the Paterson Education Organizing Committee (PEOC). “The community is in an uproar. It’s not fair,” she said about the governor’s funding plan. “I don’t know how he sleeps at night.”

Inside the tiny classroom, the governor told parents the importance of having technology in the classroom in an uncertain and changing world. “We need our schools to change,” said Christie, “they are stuck with old ways, especially in our cities.”

Christie recalled his daughter asking him who was his computer teacher was in the second grade. He didn’t have one. The governor received blame for the failures of the Paterson school district over the past six years.

Cashmir Stevens, 10, of School 4, said his school has ants and roaches. “It’s all rusty stuff, ants, roaches,” said Stevens. “His house is probably better than our school,” said the youngster about the governor.

The governor, who allowed reporters into the classroom for five minutes, blamed the teachers for blocking his changes. Christie said there’s 100 teachers in Newark collecting pay while watching television in the break-room.

“They’re so bad in the classroom, we took them out, but because of tenure laws you can’t fire them,” said Christie.

The governor’s visit to the city follows senate president Steve Sweeney’s round table on Tuesday morning in which he discussed his plan to ensure all school districts are at 100-percent funding level.

Christie did not take any questions from reporters.