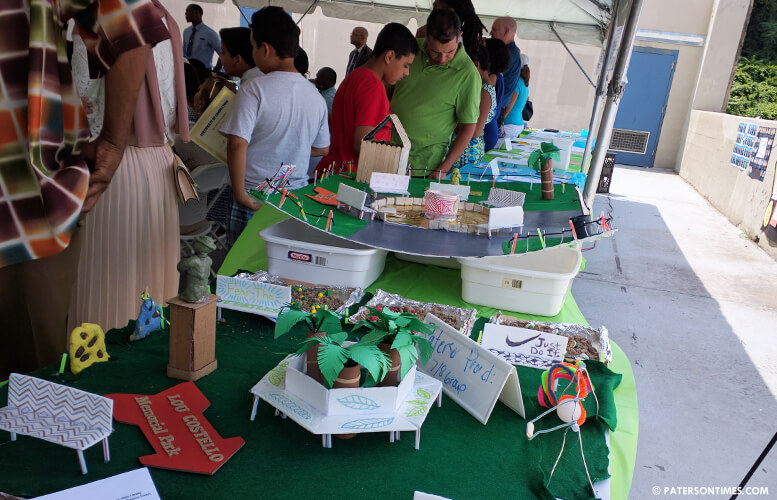 More than 50 city students took part in a month long summer program to utilize science, technology, engineering, and mathematics to build innovative solutions to better their community and the world.

Those solutions though are not going to be available anytime soon because they are scientific concepts or ideas of the future to fire up the minds of young people to pursue paths in STEM fields.

One group of students conceptualized a robot that would patrol, clean, and maintain the Great Falls National Park or any other park at night. Another group created an elaborate greenhouse to end hunger. A third studied chemicals to create a spray called Anti G to spray and erase graffiti in urban landscape.

The closing ceremony at Overlook Park on Thursday morning featured the projects as well as artworks, plaster masks, and sculptures. Students showed off the projects to their parents and other groups during the ceremony.

“We could make a greenhouse for all of these plants so we don’t suffer from hunger. We can power it using the sun,” said Adahnys Illescas, 6th grader from School 3, pointing to the various plants that produce food for humans.

Samuel Alvarez, 12, of School 9, and Ayman Elhmayni, 11, of School 28, came up with the anti-graffiti spray after studying chemicals. Elhmayni swore the group has a list of chemicals it can mix to “repeal” graffiti.

“There’s a tremendous amount of experimenting happening,” said Sarah Sterling-Laldee, supervisor of science at the Paterson Public Schools. “For us it wasn’t just let’s do engineering in a vacuum, we wanted the engineering process to be applied to improving the place in which they live.”

The 52 students, who participated in the five-week program, focused their projects on engineering and design, said Sterling-Laldee. The theme meant all of the students had to learn basic coding to design structures using Tinkercad to print objects using a 3D printer.

Sterling-Laldee said every student designed shapes in the software and printed them out using a 3D printer.

The month long summer program called Great Falls STEM cost $67,000 to run. The Victor Cruz Foundation contributed $25,000, the Hamilton Partnership for Paterson donated another $25,000, and the Paterson Public School pitched in $17,000 to make the program possible.

The Paterson Education Fund managed and disbursed the funds. More than 90 students applied, but there was enough fund for 52, said Sterling-Laldee. She said the students were picked randomly for the program.

“It opened them up. It’s a different way of learning. It’s hands on,” said Doris Pagan, program director for the Paterson Education Fund. She said the summer program went a long way to close the gap that’s often created through what is called the summer slide that results in city students losing achievement gains made during the school year.

“Our goal is to increase social and educational opportunities of the park,” said Robin Gold of the Hamilton Partnership for Paterson. Many of the students created projects that focused on the park.

For example, one group designed a hotel by turning an abandoned building close to the Hinchliffe Stadium — the Great Falls Inn.

“What they have done is extraordinary,” said Nitza Danieli, an artist and Metropolitan Museum of Art educator, who taught students to create designs using plaster. She said the students were at first a bit jittery and nervous, but soon became receptive and worked well with each other.

Danieli’s assignments for the students often required team work. She said the students learned to cooperate and work effectively in groups as they created designs.

Students also took home work from the program to finish, something that impressed school board member Jonathan Hodges. “They worked late at night, they communicated with each other and each other’s teachers. That drives educational process,” said Hodges. “There’s nothing more exciting than to let a child loose in their own wonder and curiosity to help them to desire and want to learn.”