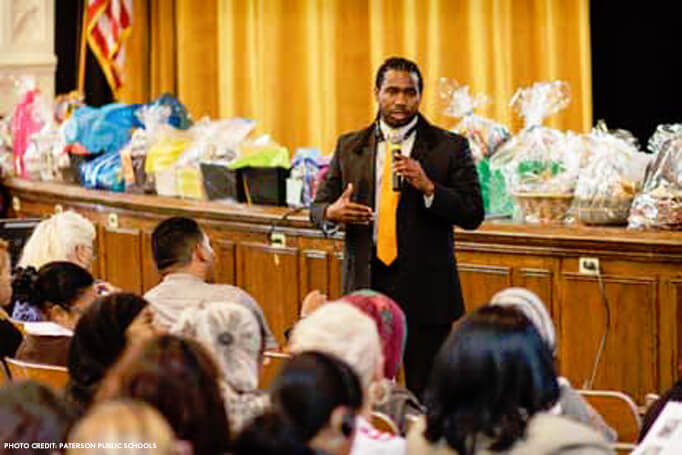 School board president Christopher Irving is facing criticism for sending an invitation letter to a campaign event on Paterson Public Schools letterhead.

Irving’s letter invites prominent city families to his annual Paterson Legacy Dinner to take place in mid-October at the Riverside Manor. His opponents say the school board president should not be using the school district’s letterhead to send out invitations to an event for his re-election campaign.

The letter sent out to honorees inviting them to attend school board president Christopher Irving’s campaign event.

“You shouldn’t use district resource for your personal or political business. If I’m on the board I can’t use the district’s letterhead to send out invitations to my political event,” said Corey Teague, former school board member, who is seeking to re-capture a board of education seat in the November elections. “When you put ‘Office of the Board of Education’ it makes it seem the entire school board is supporting your event.”

Longtime school board member Jonathan Hodges said using the district’s letterhead for a campaign event may be potentially unethical. “I’m shocked to hear that. Really? He did that? I’m hoping it’s not true and it was a mistake or something,” said Hodges on Monday afternoon. “You can’t use district materials for your own personal use.”

“That’s not right. That’s totally wrong,” said Linda Reid, president of the Parent Education Organizing Council (PEOC), an advocacy, when told of the letter. “You can’t use your sitting office for campaigning.”

Irving said he did not use district resources to produce the letter. He said the paper for the letter was purchased by him and it was produced using a private printer. The board president initially said he did not see a problem in using the district’s letterhead for the annual event which raises funds that go towards scholarships and community causes. Some funds raised also end up in his campaign account, he said.

“I don’t see any problems with it,” said Irving on Monday afternoon. On Tuesday, after reviewing the letter, he said he saw a problem. He said he thought the letter being discussed was the invitation ticket letter that was sent out for the event and made references to his title as the president of the school board.

Irving said he saw the second letter which was for honorees and recognized the issue. He said a member of his team mistakenly used the district’s letterhead to print the letter that went to 4 or 5 honorees expected to be recognized at the event. He acknowledged it was not appropriate to use the district letterhead for a campaign event.

A spokesman for the New Jersey Department of Education which operates the local school system directed a reporter to the state’s various statute, regulations, decisions, and advisory opinions on the School Ethics Act.

There was one case that was found in the state’s database of decisions similar to Paterson’s letterhead issue. The School Ethics Commission recommended the commissioner of education impose a penalty of reprimand for Belleville school board president Alfonse Demeo in September 2014 for using the district’s letterhead to endorse a city council candidate.

Hodges worried if the ethics issue turns into a complaint with the state it could jeopardize the district’s chances of securing local control from the state.

Teague said Irving’s use of the letterhead gives him an unfair advantage over others running for school board seats in November.

“You are running for re-election and now you’re pulling these trump cards out,” said Teague.