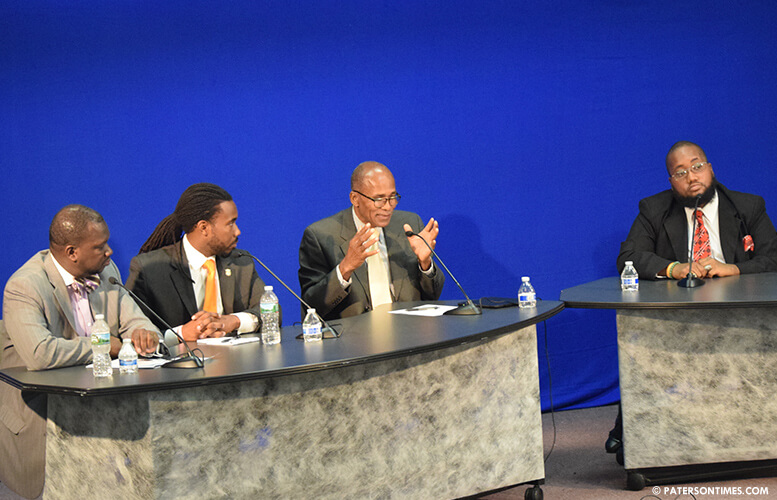 Seven out of the nine school board candidates gathered at the John F. Kennedy High School television studio on Monday evening to discuss selecting a new superintendent, school district budget, and PARCC exam as a graduation requirement.

“He has to be a change maker,” said Kenneth Simmons, incumbent seeking a third term. He said state-appointed district superintendent Donnie Evans has been a “peacemaker.” The new superintendent will have to be prepared to make difficult decisions and be prepared to push against the state for funding, he said.

“We’re going to need a superintendent who understands the many aspects of who we are,” said Christopher Irving, incumbent. He wants a civic minded education leader attuned to the different ethnic communities in the city.

Irving praised Evans for doing a “good job.” Incumbent Errol Kerr said Evans has done his best, but the academic problems in the district have not been addressed.

Kerr said he would like to see a superintendent “not aligned with political establishment in the city.”

“We have to have someone who would be willing to walk away if necessary if the state is unwilling to do what’s needed to be done. We don’t want someone who will remain there collecting a pay check knowing our children are being disenfranchised,” said Corey Teague, challenger.

“We need to find a difference maker,” said Emmanuel Capers, challenger, a football coach. He said whomever is hired should be a city resident.

Manny Martinez, a former teacher, challenger, agreed with Capers. He said the district needs someone “innovative” to tackle the problems being faced by the Paterson Public Schools.

Social worker Stacy Coleman, challenger, said she would like to see a teacher hold the highest ranking position in the district.

When asked about the Partnership for Assessment of Readiness for College and Careers (PARCC) exam being a graduation requirement beginning in 2020, Coleman responded, “To have that mandatory they won’t do well.”

Students are not technologically prepared to do well on the exam, candidates said. “Our kids don’t have the resources to pass this test,” said Capers.

Teague agreed with Capers. He said the exam is little more than a tool to gather data.

Irving said the district needs an aggressive plan to meet the PARCC graduation requirement. “We’re looking for rigor, but we’re not sure students are prepared,” said Simmons.

Simmons said the district has to equip every student with technology to ensure each pupil is prepared to take the exam.

Candidates said the district’s budget does not allow for a “thorough and efficient” education as guaranteed in the New Jersey constitution.

“We’re not spending those dollars in the right places,” said Martinez.

“We can see a lot of the money is not being spent in the classroom,” added Coleman.

Some said school board members will have to lobby state representatives to secure more state funding. However, in recent years, that effort has failed. State assembly members Shavonda Sumter and Benjie Wimberly attempted to secure more funding for the district, but each time came up against governor Chris Christie’s veto.

Irving said there may be some hope in receiving more state education funding when a new governor takes office. He said local residents should meet those running for governor and share their concern about underfunding.

The forum was hosted by the Paterson Education Fund, an advocacy. The group asked the candidates five questions. Members of the audience were allowed to write their questions in an index card.

The audience asked eight questions to the candidates.

One audience member asked about a vote the school board took to discuss the expansion and funding of the Passaic County Technical Institute leading to a clash between Irving and Kerr.

“Members who supported that initiative should find a way to defend it right now,” said Kerr without mentioning Irving.

Irving voted against a resolution to discuss the expansion. He said the discussion would have been an “us against them” conversation rather than one about education and opportunities for students.

“The conversation is absolutely wrong,” said Irving. “I will never be a board member to tell its parents or children where to go. Every parent has a right to decide where they want to send their child.”

The resolution failed in 5-2 vote during a June meeting. Kerr voted against the expansion of PCTI while Irving and Rivera voted in favor. Simmons was not present during the vote, according to district records.

Another audience member wanted to know the positions of the candidates on charter schools. “I don’t have a problem with charter schools,” said Coleman. She said she supports school choice.

“Charter schools are not the enemy,” said Martinez, who works for the Community Charter School of Paterson. He said charters provide parents a choice by allowing them to escape failing neighborhood schools.

The forum was attended by 35 people. It was separated into two segments. Simmons, Irving, Kerr, and Teague appeared in the first segment while Capers, Coleman, and Martinez appeared in the second.