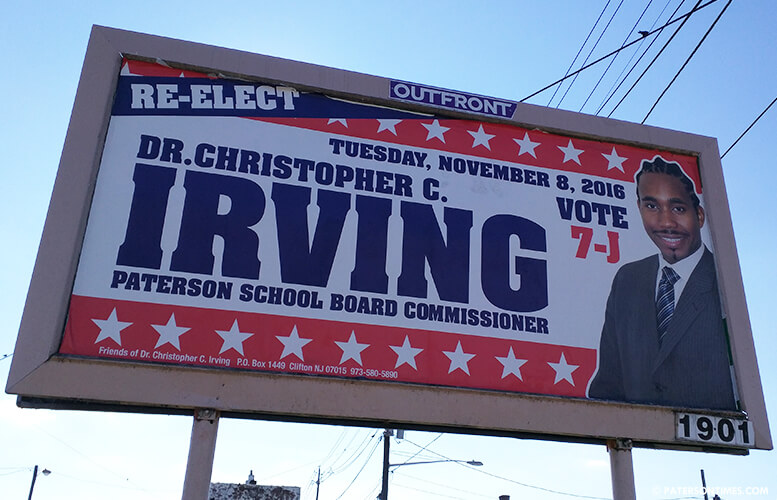 With the city’s school board election days away, school board president Christopher Irving sent out a mailer to voters urging them to cast their ballots for him and two of his allies without having the legally required “paid for by” label on his campaign flyer.

Irving’s opponents pounced on him for failing to label his campaign flyer which urges voters to also cast their ballot for Flavio Rivera and Manny Martinez.

Reverse side of the mailer received by voters showing the three candidates’ ballot positions.

“It disturbs me. At least we should know what account is paying for it,” said Errol Kerr, who is running against Martinez. “It’s just wrong in so many ways.”

With neither the 29-day nor the 11-day pre-election campaign finance reports received by the New Jersey Election Law Enforcement Commission (ELEC) from Irving, it is impossible to determine who is paying for his campaign mailers.

Front side of Irving’s flyer received by voters.

Irving did not respond to a call for comment on Saturday morning.

Irving has sent multiple mailers to voters – even some of his opponents and critics received his flyers in mail. Political operatives say mailers are expensive and require great sums of money to send out.

One of his opponent to receive the mailer was Corey Teague. He pointed out the mailer has Irving’s Lakeview Avenue home address.

“It raises a lot of questions,” said Teague. He said the questions have to do with who is contributing so much money to Irving’s campaign. Irving, who serves as the president of the Board of Education, has held multiple fundraisers to raise money for his campaign.

Teague said some of his campaign lawn signs also did not have the “paid for by” label. “I put stickers on my signs,” he said.

“All candidates and committees subject to the Act [The New Jersey Campaign Contributions and Expenditures Reporting Act] are required to label all political communications with a political identification statement (“paid for by” language),” reads the ELEC’s Compliance Manual for Candidates. “The term ‘political communication’ includes a press release, pamphlet, flyer, form letter, sign, billboard, paid advertisement printed in any newspaper or other publication or broadcast on radio or television, or telephone call featuring a recorded message, or delivered or accessed by electronic means, including, but not limited to, the Internet, or any other form of advertising directed to the electorate.”

Irving, who is running for a third term, has not properly labeled his bill boards. A billboard (pictured) that hangs on the roadside of Madison Avenue close to Ellison Street has his campaign committee’s name and a Clifton PO Box address, but lacks the “paid for by” label.

Irving’s mailer urges voters to “Vote for Three” by highlighting their ballot positions. Irving is last on the three-year full-term section on the ballot which places him at a disadvantage. He came close to losing his seat three years ago.

The last time he reported his contributors on a campaign finance report he suffered backlash at the polls when voters learned he had received a large campaign contribution from a group that supports charter schools and governor Chris Christie’s education agenda.

Irving is not alone in failing to file timely. Six of the nine individuals running for the two school board races have been delinquent in filing their campaign finance reports.