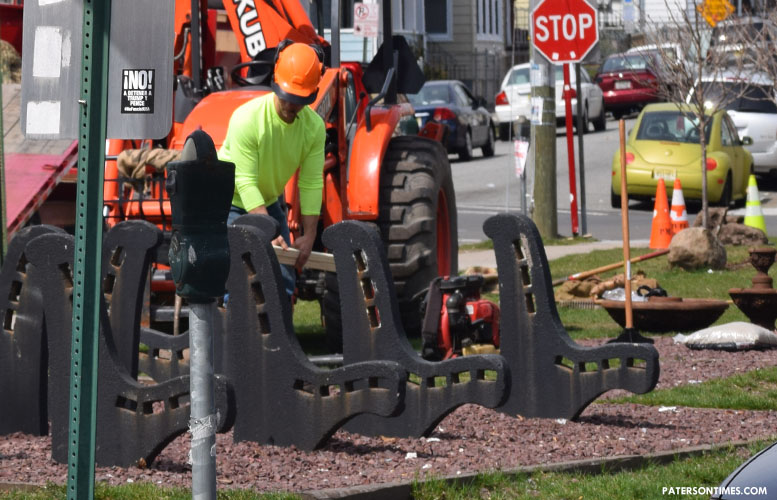 The small triangular greenspace dubbed by neighborhood residents as South Paterson Park on Main Street is getting new benches and landscaping from PSEG.

Councilman Andre Sayegh on Monday said the improvements include new benches, a water fountain, and grass. He said the company is replacing slabs on six existing benches and installing two new ones.

Sayegh said the workers will also plant a cedar tree at the park.

“It’s just to reflect the Middle Eastern influence in the area. Cedar tree is symbolic of that section of the world,” said Sayegh. “It will accentuate our cultural diversity.” The Lebanon cedar, which appears at the center of Lebanese Republic flag, is widely planted in that country as an ornamental tree in parks and gardens.

“We had a line that went into the park. One of our manholes was actually inside the park,” said Everton Scott of PSEG. He said the company had to secure permission from the City Council to gain access to the park to complete utility work.

Scott said PSEG is not putting in a new fountain at the park. Sayegh said deputy mayor Riad Ammar, known by his nickname Ray Baker, has adopted the park and is renovating the water fountain.

“We’re going to connect it and have the water running,” said Baker. He adopted the park almost two years ago and plans to handle the upkeep, he said. “We’re trying to keep it nice and clean.”

Sayegh at that time asked if the company would be willing to make some improvements to the park. Scott said he told the councilman if the improvements are affordable and won’t be a drain on the company’s resources it would consider revamping the park at the corner of Main Street and Gould Avenue.

Scott said a landscaping architect surveyed the park and proposed improvements. He said PSEG had to remove a tree that was dying at the park. Workers were at the site on Monday making the improvements to the park.

Scott did not immediately have a cost for the improvements. It’s not clear when work will be finished at the park.

The park has become a center of cultural life in the booming South Paterson section which suffers from a dearth of greenspace. Last year, the city’s Muslim community celebrated the start of Ramadan with a Egyptian lantern lighting.

“I just asked PSEG. What’s the worst thing they could say, ‘No,’” remarked Sayegh. He said the company also installed new lights around the playground of School 25. “All you have to do is ask. I pay my PSEG bill on time. The least we could do is ask them to help us out. We’re not a wealthy city.”

Sayegh worked with several organizations to secure a playground for School 25 which is in the Lakeview section.