A massive energy infrastructure upgrade project with a $15 million price tag that includes installation of solar panels and led lighting at 17 school buildings will cut the district’s energy expenses by more than 50-percent.

The project will be financed by borrowing money, said Flavio Rivera, chairman of the fiscal committee. He said the energy savings will pay for the annual debt service payments to pay back the bonds.

“Whatever energy savings we have will pay off the finance component of it,” said business administrator Daisy Ayala on Wednesday night. The district will likely borrow through the Passaic County Improvement Authority, said Rivera.

The financing will be done through the Energy Savings Improvement Program (ESIP), alternative financing mechanism to make energy conservation upgrades. The district will be able to enter into a 15-year “performance contract” type agreement with an energy service company to make the upgrades. This allows the district to leverage the future value of energy savings to pay for upfront project costs.

There are three ways to handle a project through the program. Land-lease, company provides the funds for the project, and bonding. Low interest rates make bonding an appealing option for towns and school districts. Paterson will be bonding to pay for the program.

15 municipalities and 75 school districts, vocational schools, and colleges are using the ESIP financing mechanism to make energy efficiency improvements, according to John Reinert, spokesman for the New Jersey Board of Public Utilities.

State law requires the programs to be cash flow positive. In other words, the annual payments to cover upgrade expenses will have to be lower than the yearly energy cost savings. There are two scenarios the district will have to consider — in both cases the district will see an average of $861,000 positive cash flow, according to information provided to board members. 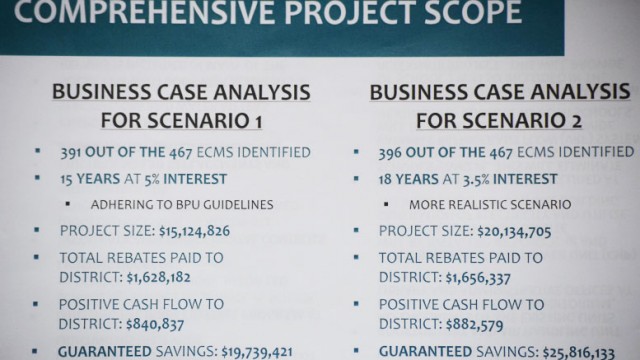 The two scenarios the district has to consider. Courtesy of Energy Systems Group (ESG).

The district selected Robbinsville-based Energy Systems Group, after receiving proposals, as its energy service company on Wednesday night. The proposals were reviewed by district consultants. The firm is submitting a plan for the upgrades to the New Jersey Board of Utilities for approval.

The first case will result in the upgrades of 391 of the 467 identified energy conservation measure (ECM) units things like lighting upgrades, HVAC controls, and so forth. ECMs are identified through an energy audit. The second case has 5 more ECM units.

School officials are leaning towards the second option.

Steve Morlino, facilities director for the Paterson Public Schools, said the 17 schools are part of the first group. He said 22 other schools are in the second group for upgrades. Upgrades to the second group will be done through a separate application to the state, he said. He did not have a list of schools available on Wednesday night.

There’s no limit to utilizing the ESIP funding mechanism, according to the state.

Once approved by the state, the project will be completed in two years, according to Moran. The Board of Public Utilities which serves as the sheriff of the ESIP program requires the district to submit an energy savings verification report covering an entire year to ensure the promised savings are being realized.

The state utilities board has been involved throughout the process, said the business administrator.

Andrews, an engineer, said the work will be done during the summer to avoid disruptions. Both Andrews and Moran said the company will contract with local vendors. School board president Christopher Irving said the project will provide a big boost to the local economy. He said this project will be a big job creator for the city.

As many as 1,000 jobs will be created as a result of this project, reckoned Moran. She said local contractors will be hired to make the upgrades and supplies will be purchased from local vendors as well.

“This seems to be a step in the right direction,” said school board member Jonathan Hodges. However, he needed more time to review the details of the project, he said.

“Is there a rush to do this?” asked Hodges.

“Everything here is up to the snuff,” replied Irving. He said the fiscal committee reviewed the plan and has given it greenlight.

Hodges suggested approving the plan in two weeks. Irving told Hodges he could vote against the measure. Hodges voted against.

The $15 million contract to Energy Systems Group (ESG) was approved in a 6-1 vote.