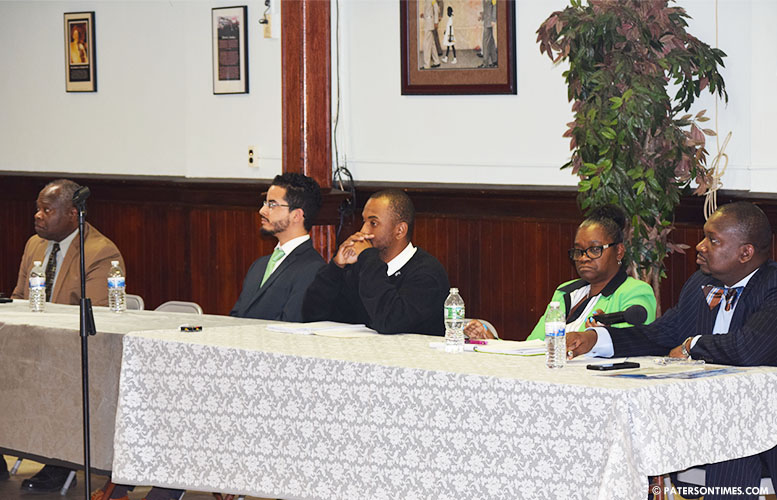 Five out of the nine men and women running for three obtainable school board seats faced off in a debate at St. Luke Church. Some of the issues that dominated the forum, hosted by the city’s chapter of the NAACP, were quality of education, charter schools, and local control.

Incumbents Jonathan Hodges and Chrystal Cleaves identified low state test scores as the most pressing issue of the day. However, both had different ways to improve education to better test scores.

“We’re teaching children to take a test. We need to teach our children to be life learners,” said Cleaves (pictured, second from right). Under state control, the district has been focused on teaching students to take state exams, she said.

This has neither improved quality of education nor led to better scores on state exams. “All the state has done is failed our children,” said Cleaves. She wants schools to move away from preparing students to take state exams.

Hodges (pictured, very far left) called for a return to the basics. He wants the district to arm students with note taking, cursive writing, and study skills.

“If you can’t take notes, how do you go home and study?” said Hodges. He also wants computer programming taught at early grade levels.

Newcomer Andres Scott, a social worker at the Passaic County Women’s Center, wants an emphasis on environmental science. “Let the kids go outside more to see what is going on,” he said. He also wants the district to focus on art and music.

Cleaves also wants to see that program expanded to other schools.

Hodges wants the same training given to teachers of that academy to be provided to other teachers. He sees that as a way to improve what teachers expect from their students.

The end goal of a better-quality education at the district is to get students admitted to the country’s top colleges. Newcomer Sebastian Mejia (pictured, second from left) suggested not enough students are exposed to colleges.

Mejia has volunteered at the Youth Self Development program, a college prep program, at Eastside High School. He found many students often underestimate themselves.

“They did not think they were capable or even worthy of attending one of these higher education institutions — Ivy league schools,” said Mejia. He said the district should encourage field trips to universities and build partnerships with colleges.

Mejia, who is born and raised in Paterson, has a political science degree from Montclair State University.

Both of the newcomers were stumped when an audience member asked them to explain the Quality Single Accountability Continuum (QSAC), a metric the state uses to evaluate school districts.

“Does it have something to do with autism?” asked Mejia. “I studied it, but I don’t know.” He may have studied the wrong QSAC. There’s a nonprofit out of New York City that shares the same acronym called Quality Services for the Autism Community.

That’s where the similarities ended between the two newcomers.

Mejia was polished and well-spoken. He spoke directly to the 60 or so people who attended Thursday’s forum at the Carroll Street church.

Scott struggled throughout the two hours. He often aimed his eyes at the ceiling rather than at the audience. He spoke in fragments. And often made remarks that had little to do with the question he was tasked to answer.

The QSAC measure has five areas. Both were asked for the areas the district has regained and what remains. Paterson has regained control over operations, personnel, and fiscal management. It has yet to secure control over instruction and program and governance.

School officials hope to regain both remaining areas and ultimately local control late this year or early next year.

All the candidates agreed the district is prepared for local control.

The newcomers weren’t the only ones stumped by a question. So was Cleaves when the candidates were asked to interpret school board president Christopher Irving’s statement that the board of education does not need “lone wolves.”

“What does that statement mean to you?” asked ex-school board member Corey Teague. He interpreted this as suggesting there’s no room for independent thought at the school board.

Irving’s statement was aimed at Hodges. Irving and Hodges represent opposing factions on the school board.

“I cannot decipher what statement someone else said. And I’m not going to try,” said Cleaves. Her votes on the school board often align with that of Irving’s.

“I don’t subscribe to groupthink,” said Simmons. When on the board, Simmons often, but not always, aligned with with Irving’s faction. For example, in 2015, he was the key vote that gave Hodges the school board presidency.

“I do think it’s the shunning of independent thought,” interpreted Mejia. He said the board needs people who can think for themselves. “We need to hear all of the different angles.”

“I don’t mind being a lone wolf. If you have a six-cylinder car and you have only four or three of them working – everything else is locked. It’s not going to go very far,” said Hodges. “You need independent thoughts. I insist on thinking for myself.”

The candidates were also asked whether or not they support a moratorium on charter schools. Hodges has been opposed to charter openings in the city.

Mejia and Simmons favored a moratorium on charters.

“I’m not against charter schools,” said Scott. He said charter schools have ostensible “high standards.” He subsequently said he neither opposes nor favors charters.

Cleaves favors school choice, but dislikes the way charters are funded. She wants charters to be funded directly by the state rather than from the district’s budget.

The district sent $46 million to charter schools in 2017-18 school year. This siphoning of funds led to layoff of more than 90 teachers in the spring.

Members of the National Association for the Advancement of Colored People (NAACP) invited all of the candidates in late September via letter.

Ramirez received the letter late and was not able to attend. An academic advisor at Berkeley College, he works evening hours on Thursdays, he said.

The next school board forum is being hosted by the Paterson Education Fund on Monday. The forum will take place at 6 p.m. inside the John F. Kennedy High School television studio.