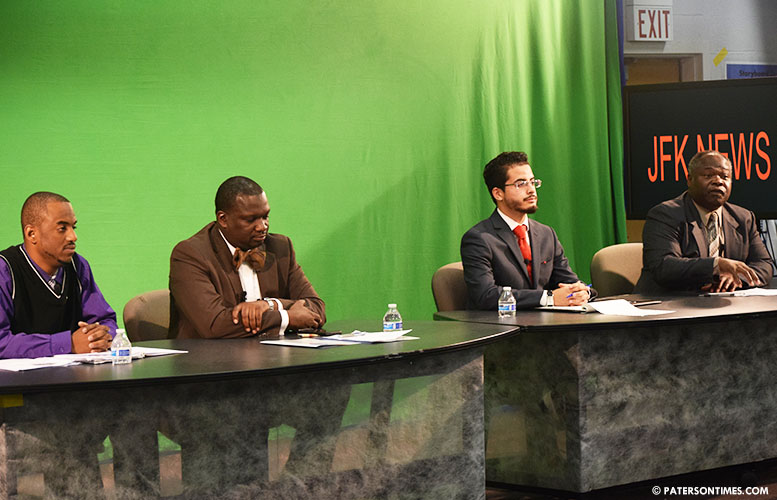 Four of the nine candidate running for three available school board seats discussed zero tolerance for bullying, state underfunding, and the need for more drug abuse counselors at a forum hosted by the Paterson Education Fund inside the John F. Kennedy High School television studio on Monday evening.

“Children don’t respond well to zero tolerance,” said Hodges (pictured, far right). He said a six-year-old was the victim of a zero-tolerance policy. The boy had a toy gun that did not belong to him and received a 10-day suspension, he said.

“Suspension just adds to their absences,” added Mejia (pictured, second from right), who volunteered for a college prep program at Eastside High School. He suggested alternatives to discourage bullying like meditation and yoga. Mejia also wants gardens at schools to promote harmony.

Andres Scott (pictured, far left) favored zero tolerance approaches to bullying. “I’ll take zero tolerance. Children who are bullied at school have very few choices and very little recourse,” he said. He said adults harassed and intimidated at work or elsewhere have many options like obtaining a restraining order, but no such exists for students.

Drug use and substance abuse counselors

Lack of substance abuse counselors is to blame for the prevalence of drug use. “We use to have 23. We’re down to 13,” said Hodges. “It was cut down to 23. There’s a critical shortage there.”

“I think more needs to be done. All you have to do is walk around and you’ll see the drug use that has taken our city hostage,” said Mejia.

Simmons, Hodges, and Mejia want more drug abuse counselors in the district. Scott did not directly answer the question. This year, acting superintendent Eileen Shafer boosted the number of drug counselors from 11 to 13.

Simmons and Mejia said district needs to search for funds in other places. Simmons said the district needs to train and encourage teachers and parents to write grant applications to secure more funding from government and private sources.

Mejia said the schools should collect tax credits by recycling and saving on energy by exploring solar power. The district is moving ahead with a massive $15 million energy infrastructure upgrade to produce savings.

The forum at the high school’s television studio attracted 30 people. Some of whom wondered where the rest of the candidates were.

For the second time Fannia Santana, Joel Ramirez, Joyed Rohim, Juan Kivelier Sosa were a no-show at a candidate forum. This led to criticism from former school board member Corey Teague.

“If you don’t find it necessary to address the electorate in a public forum to explain why we should vote for you, then you really have no business running for office,” said Teague. Two candidates were absent due to death of family members. One could not take off from work and another could not take off from school, according to the organizers of the forum.

Chrystal Cleaves, who was present in the first forum last week, was absent from the second. She had a death in the family.

The hour-long forum saw slight performance improvement from Scott. He had a tough time at last week’s debate in St. Luke Church often stumbling on questions and failing to directly address voters.

Scott, 31, an assistant coach at the Passaic County Community College and a social worker at the Passaic County Women’s Center, found fault at the Paterson Times coverage of last week’s debate which was hosted by the city’s chapter of the National Association for the Advancement of Colored People (NAACP) that mentioned his numerous faults that was readily observed by attendees.

In an email on Monday afternoon, Scott claimed his statement praising charter schools for ostensible “high standards” was contorted. He clarified he neither favored nor opposed charter schools in a series of emails that included profanities. In one email, Scott called a reporter, who is not African-American, a “nigga.”