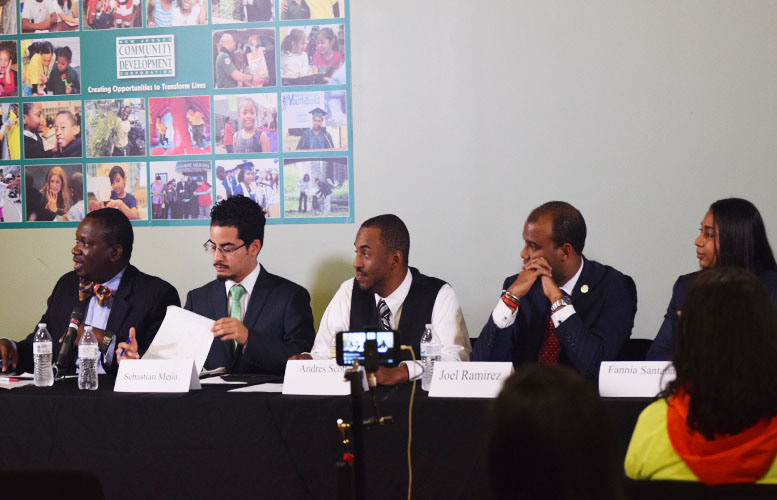 Five of the nine candidates running for the three available school board seats took questions from young people at the Paterson Youth Council forum on Wednesday night. Students, many of them from John F. Kennedy High School and the Passaic County Technical Institute, asked the school board hopefuls whether they agreed or disagreed with cuts made to art programs.

“I absolutely disagree with cutting the arts. Our children, through the arts, should be able to see a different world that we do not see looking at the streets of our city,” said Joel Ramirez.

“Painting is very therapeutic,” added Sebastian Mejia. He said it makes students creative and imaginative while at the same time curbing aggression and delinquency.

Former two-term school board member Kenneth Simmons pointed to the fiscal reality that led to cuts in art programs. He said school officials were given the choice to either cut arts or fire teachers.

“It was a tough decision that had to be made,” said Simmons. He disagreed with cutting art programs. He played the saxophone while attending Eastside High School. He struggled with algebra as a sophomore. “The chairman of the math department pulled me aside and said, ‘If you can do music you can do math.’ It wasn’t until then that it clicked for me,” he said.

Simmons went on to become a computer engineer.

“I’d like to see them come back,” said Andres Scott.

Scott and others were provided questions in advance to prepare for the forum. A two-student panel asked the questions. After their questioning, the candidates took impromptu questions from the students. 55 people, mostly students, attended the forum at the Rogers Meeting Center.

One student asked the candidates how they would find the funds to restore art programs.

Mejia said the district needs to form partnerships with museums and art organizations in the New York Metropolitan area. He also wants the district to pursue grants to fund art programs.

“Fundraising is a way we’ll get the arts back into the schools,” said Scott. He wants to involve parents and students.

Ramirez wants the district to strike shared services agreements with municipal and country governments to produce savings and funnel money into art programs.

Simmons said the district needs to look at “alternative” funding sources. He wants parents to go after grants.

Simmons also wants local art groups to work with students. He also wants the district to connect with companies in the area to help fund art programs.

The candidates were asked about their position on charter schools.

“Charters schools fill a void in communities with failing school districts,” said Ramriez. “They provide parents a number of options. I have nothing negative to say about charter schools.”

Santana also favored school choice. “I have nothing against charter schools,” she said.

“I’m running for a public school seat. I think as long as public schools are not negatively affected by funding, I don’t really see a problem.”

The candidates fielded more than a dozen questions. Multiple questions had to do with preparing students for college and ensuring students receive high marks on entrance exams like the Sat.

Mejia wants the district to encourage former students, who have graduated college, to inspire and mentor city students to attend college.

“I’d like to look into our guidance department,” said Ramirez. He works as an academic advisor at Berkeley College. He wants to find out how guidance counselors are keeping track of students and providing assistance to those at risk.

Some school board members have called for the hiring of more guidance counselors to boost the number of students heading to four-year colleges. One of those has been incumbent Jonathan Hodges.

Hodges was among the four candidates absent from the forum. Incumbent Chrystal Cleaves and challengers Joyed Rohim, Juan Kivelier Sosa were also not present.

Rohim and Sosa have missed all candidate forums hosted so far.

Cleaves and Hodges have attended other forums.

The candidates ended the forum by giving encouragement to the dozens of young people in attendance.

“You have what it takes to succeed. I myself grew up in the same neighborhoods as you,” said Ramirez. He secured a bachelor’s degree, a master’s degree, and a career at age 25, he told the students.

“You guys can do the same,” said Ramirez.