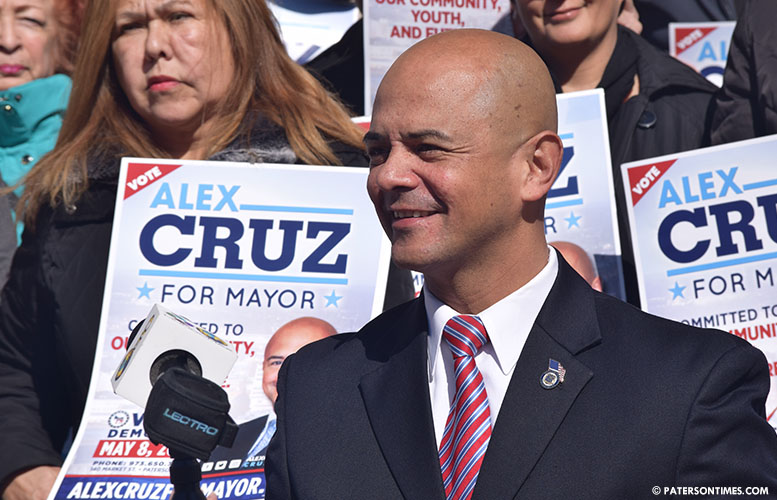 Mayoral candidate Alex Cruz, dogged by questions of whether he lives in Paterson, held a press conference on the steps of the historic City Hall on Thursday morning to clear his name and put the residency issue behind him.

Cruz stood before a podium with more than a dozen of his supporters behind him on the steps of City Hall.

“Paterson is my home. I was born here, raised here, went to school here; and spent my entire adult life serving the good, decent and honorable citizens of Paterson,” began Cruz. “In every meaningful aspect of the word, I am a Patersonian.”

Cruz moved from Paterson to Little Falls in 2002, he said. He said the decline in the city’s political leadership and corruption forced him out of his hometown.

“We became a ship without a moral compass that increased our crime and decreased the quality of education for our children,” said Cruz. “I had enough of watching the city decline and the children that have been left behind or forgotten.”

Cruz’s rhetoric may ring hollow to many voters because his daughter and son do not attend Paterson schools, but the Passaic Valley High School.

“Yes, they are enrolled there,” said Cruz. “Our family, by me living here, has been disrupted for over a year and half.”

Cruz is not separated from his wife.

Cruz’s son and daughter are in the 11th and 12th grades at the high school. He said he moved into Paterson in Nov. 2016. However, he did not change his voting address from Little Falls to Paterson until Jul. 19, 2017 which puts him two months behind the one-year requirement called for by state law.

Cruz has voted 14 times in Little Falls since 2007. His press conference speech raised yet another issue. His side submitted documents to the city clerk that shows he leased a second-floor apartment at 221 Pennsylvania Avenue with Dynasty Auto Body. His lease is dated Nov. 1, 2016.

Cruz voted from his Little Falls address on Nov. 8, 2016, according to Passaic County election records.

Cruz took questions from news reporters, but did not provide detailed answers. For example, a reporter asked whether voters should view his candidacy with a degree of suspicion given that he is promising to improve the lot of young people when his own children do not live in the city, Cruz directed people visit his website.

Cruz often spoke in the third person. He said he pays taxes in both Little Falls and Paterson. He and his wife own a property on Madison Avenue. He may have left the city when former mayor Martin Barnes was convicted of corruption in 2002, but his claimed return to the city in 2016 occurred while another mayor Jose “Joey” Torres was preparing for prison for using public works employees to renovate a private warehouse.

Torres received a five-year prison sentence the next year. His wife is backing Cruz for mayor.

“Once Alex Cruz gets elected on May 8th, we will make Paterson great again,” said Cruz.