The school district’s move disbanding its legal department two years ago has produced an estimated $550,000 in savings, according to a district report obtained by the Paterson Times.

“Is it saving us money?” asked board member Emanuel Capers in mid-March.

Bob Murray, the district’s chief outside counsel, told board members the district saved hundreds of thousands of dollars in the past school year. 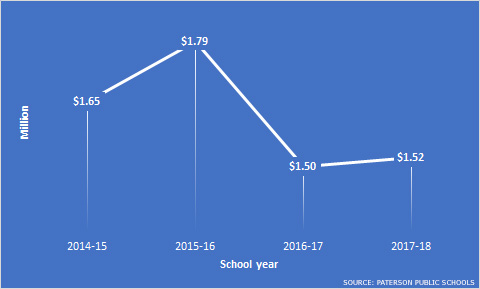 School board member Jonathan Hodges also wondered whether the district was saving money. He refused to vote on approving new legal contracts without a report.

When told the district’s legal expenses dropped from $1.78 million to $1.5 million in the past year, both Capers and Hodges said they would have still liked to see a report prior to voting on spending money on more legal contracts.

The contracts awarded last month were not included in the district’s report. However, the Paterson Times included them in the 2017-18 school year legal expense calculations.

Some school board members have raised questions about performance. Capers requested a score card from Murray to see whether the law firms were winning cases.

Murray said the district’s outside lawyers have been winning cases.

Under the outsourced arrangement, Murray receives the largest contract of all firms. He received $467,961 in the 2016-17 school year. He is expected to receive $475,512 in 2017-18 school year. That’s twice the amount — $210,700 (including benefits) – the district’s chief in-house attorney Lisa Pollak made prior to the dissolution of the legal department.

The district dissolved its in-house legal department in July 2016 due to budget cuts. Under the old arrangement, the district still used outside law firms. Murray’s firm was one of them. His firm received $314,288 in 2015-16 school year for handling legal work for the district, according to the report.

Murray of Shrewsbury has solid Paterson credentials — he was born and raised in South Paterson. He has worked for the district over the past 20 years, according to superintendent Eileen Shafer.

The dissolution of the in-house legal department has created problems in obtaining legal opinions on issues. For example, one district administrator said he has had to rely on attorney friends when in need of a quick legal opinions.

This year, the report shows, five outside firms are working for the district. A sixth firm, Law Offices of Abdelhadi and Associates, was added last month to handle real estate matters. The district also pays differing amounts to four arbitrators.