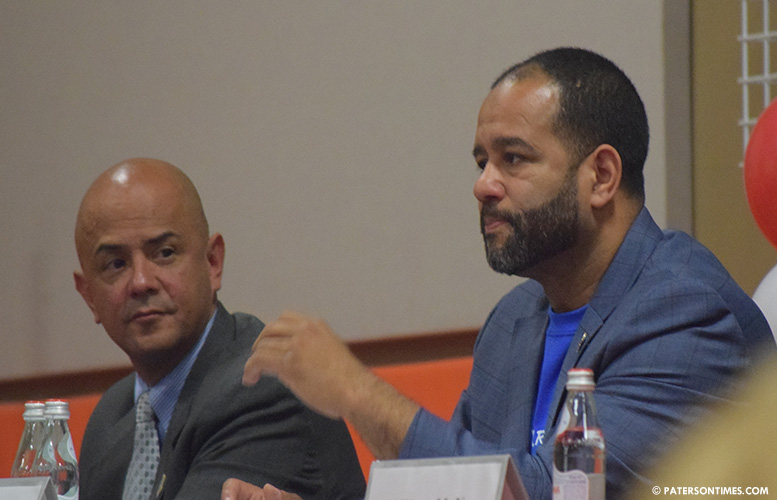 Detective Alex Cruz thought the residency question was behind him following a favorable court ruling. He was wrong.

Councilman Michael Jackson laid into Cruz on his residency problem at a mayoral debate on Sunday night. Cruz claims residency in the city while his wife and children live in Little Falls.

“A judge approved this man to be on the ballot when he lives in the city part time. And his wife and kids refuse to live in the city,” said Jackson. He noted judges are appointed by elected officials.

Jackson prefaced his remarks by stating Cruz is a “pretty good friend” and the councilman “respect him greatly.”

“Alex Cruz, as you say part-time, has done more for our community, has affected more lives in my entire career in the city of Paterson, than you have, sir,” retorted Cruz.

Cruz was heckled by a woman at a forum the previous Sunday. A woman from the audience shouted, “You don’t even live here!” while he spoke at a Peruvian and Dominican community forum last Sunday.

Cruz’s candidacy was challenged in court last month. Passaic County Superior Court judge Ernest Caposela, who has had an enormous influence on municipal elections over the past years, ruled in favor of Cruz. He allowed Cruz to remain in the race — based on the police officers’ union president’s testimony, questionable leases agreements, and sketchy rent receipts — despite evidence the mayoral candidate does not reside in Paterson.

Caposela’s other important rulings were in the 2016 municipal elections in 5th Ward and the 2nd Ward. He did not nullify the outcome of the 2nd Ward race, but rather allowed the results of an election, rife with mail-in voter fraud and irregularities, to stand. The adverse effect of his 2nd Ward ruling is expected to be felt in this election.

Jackson said having decision makers live outside of Paterson creates a serious problem for residents. He said this has created enforcement problems in the community.

“Guess what, all of those people in charge of enforcing those issues, they are somewhere else, sleeping quietly, without having to worry about gun violence, bullets going through their windows,” said Jackson.

Jackson criticized department heads who do not live in Paterson.

“Those who make decisions,” said Jackson, “should be somewhere in your neighborhood or someone else’s neighborhood here in the city.”