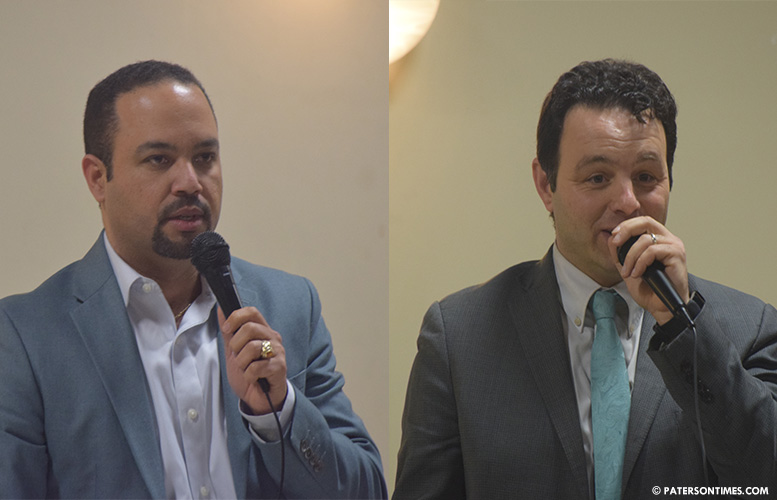 Sayegh raised $171,123 for his run while Rodriguez raised $169,400. Both men have $67,000 on hand, according to their reports. Both men’s opponents in the six men mayoral race are far behind in fundraising.

Rodriguez draws a distinction between his campaign cash and Sayegh’s by pointing out his funds are from his personal checking account.

Sayegh said he has gotten contributions as small as $10 from his constituents. He criticized Rodriguez for allowing individuals to hand out cash to potential voters at his campaign headquarter.

A group of rappers endorsed Rodriguez on Sunday. One of them was captured on photographs handing out cash.

Sayegh said it raises “red flags” when a municipal employee earning $73,000 is able to put in more than $100,000 into his campaign. Rodriguez said his funds are from savings accumulated over 20 years working for a large telecom company.

“I always made six-figure,” said Rodriguez, who works as a telecommunications system analyst at the Paterson Police Department. He has real estate and printing businesses, he said. In the past, he has said he made money from trading stocks and currencies.

McKoy could not immediately be reached for comments on Tuesday morning.

“I’m not really focusing on fundraisers,” said Jackson, who is running a lean campaign. “I’m spending my own money on things.” He has $9,163 in his campaign account, according to his 29-day report.

Councilman Alex Mendez and police officers’ union president Alex Cruz have not filed any reports with the state.

Mendez’s opponents criticized him for failing to file reports on time. Campaign finance reports allow voters to see a candidate’s source of funding.

“The number of signs you see from Mendez, somebody is pumping money for him. Where is that coming from? That’s the mystery of the whole thing,” said Rodriguez. He said he wanted to see how much money Mendez allegedly got from his trip to the Dominican Republic.

Mendez did not respond to a call for comment.

“It just proves the point Alex Mendez is not fit to be mayor. He is fiscally irresponsible,” said Sayegh. He pointed to Mendez’s past late filings.

Mendez has been delinquent in filing his campaign reports over the years. For example, his 2014 at-large council race campaign report was filed a year late.

Sayegh gave Cruz a free pass. “He’s not chronically late. He’s new. Some people give him the benefit of the doubt,” he said.

Cruz’s campaign opened a depository in Feb. 2018. The state did not receive his 29-day pre-election report.

“They have backdoor people doing things for them,” said Jackson of Cruz and Mendez.

Cruz did not respond to a call for comment.

Sayegh raised $171,123 for his mayoral run, according to his 29-day pre-election report. He has $67,219 remaining in his account. He is pouring money into campaign signs, promotional material (mugs and tote bags), and consultants. His campaign hired Parano & Associates of Teaneck for grassroots canvasing and governor Phil Murphy’s campaign manager Brendan Gill’s firm BGill Group for $21,721 and $7,500 respectively, according to his 29-day report.

Rodriguez is spending much of his money on advertising, campaign signs, television ads, and consulting. He spent $10,000 on television ads. He paid $12,962 to JHSM of Teaneck for canvasing, consulting, and database.

“One of the biggest things in Paterson is corruption,” said Rodriguez. “The least any candidate can do is be transparent with the voters. Show them where the money is coming from; show them who you are paying. And then let the voters make a decision, if they want to associate with you, based on who is funding your campaign.”