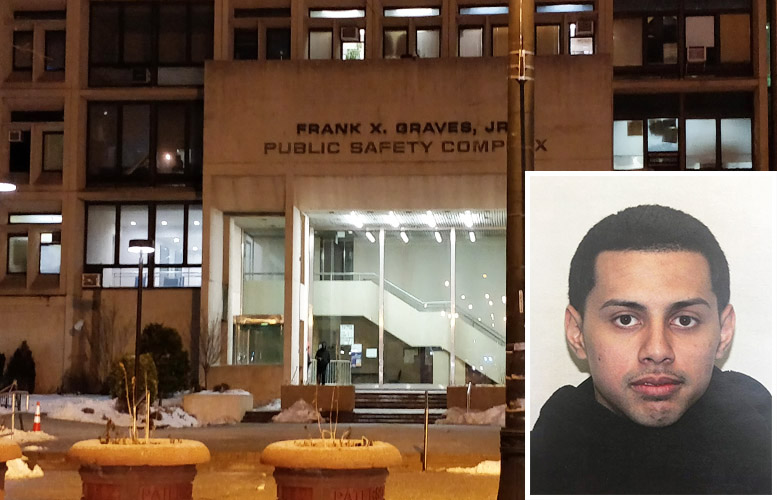 A 26-year-old officer from the Paterson Police Department — third in two weeks — was arrested for allegedly dealing heroin, crack-cocaine, powder cocaine, and marijuana, according to U.S. Attorney Craig Carpenito.

Ruben McAusland, 26, of Paterson, was apprehended by FBI agents on Friday morning. He is charged with distribution and possession. Federal authorities said McAusland dealt various types of drugs from late 2017 through early 2018 to a person cooperating with the FBI.

Authorities cited a number of instances when he sold drugs to a witness, who cooperated with law enforcement in hopes of obtaining a more favorable outcome to a recent drug conviction.

On Sept. 28, 2017, McAusland spoke to the witness using FaceTime, an iPhone video chatting application, and offered to sell heroin, marijuana, and cocaine for $50.

“You buy trees?” McAusland asked the witness.
“It depends on how much it is,” replied with witness.
“Uh, a pound.”
McAusland stated the price: $2,500.
“Let me talk to my man. Let me see what he wanna do,” the witness told the officer.

“What’s good, Roob?” said the witness while quickly adding, “Here you go” as $2,500 in cash was handed over to the officer.

One pound of marijuana was exchanged for the cash.

“How much can you buy at a time?” asked McAusland.
“If we buy a lot, y’ll come down on the number?” asked the witness.
McAusland replied he is open to reducing price on volume.

The witness handed FBI agents the 1.9 pounds of marijuana bought from the officer.

Where was McAusland getting the drugs?

“When you gonna come across something else for me?” asked the witness.
“Yo, I had a big bust, but we had too many bosses there. We had like 50 vials of crack cocaine,” said McAusland.

“I got a big-time move that came to my table. You deal with white?” asked McAusland speaking of cocaine.
“Yeah, hell yea. They turn it into crack, it’s good,” replied the witness.

McAusland told the witness the cocaine was “straight out of the Southern border.”

“I’ll hit you with a number and then, uh, we’ll talk,” McAusland told the witness.

Feb. 9, 2018: McAusland arrived at the witness’s house in his police car. He discussed selling certain pills, according to charging documents.

The witness wanted to know prices. The officer agreed to provide samples of the heroin pills that look like Percocets.

Feb. 11, 2018: McAusland met the witness at 11:30 p.m. in a supermarket parking lot, half-mile of the police headquarters. He arrived in a marked police vehicle.

Mcausland warned the buyer to watch out for cameras.
“There’s cameras here,” McAusland told him.

The witness replied with an angry emotion icon.
“I don’t wanna hear it!” replied McAusland.
“U said they pressed dope right cause my boy don’t believe me he said they hit like the real thing [.]“

McAusland told the witness to call him.

McAusland sold $400 worth of heroin pills.

McAusland offered to sell the entire lot or in batches.

The witness told the officer to hold on to the pills for him.

“Nah, this is your deal, man,” McAusland told him.

McAusland asked if the pills were “moving,” selling well.
The witness replied in the affirmative.

McAusland replied, “We gotta go down there” — “Texas.”

Later in that meeting, McAusland said, “I’m gettin’ 100 pounds of weed coming in.”

“Two grand a pop, but you gotta buy 3,” McAusland told the witness.

Both Bustios and Ramos pleaded not guilty in court. All three officers joined the police force in Jan. 2014.

“These were obviously three rotten apples,” said police director Jerry Speziale on Friday afternoon. He said McAusland will be placed on unpaid suspension as were the other two officers.

McAusland was making $48,860 when he allegedly sold drugs.

“This is not indicative of the 420 police officers,” said Speziale. He said the police department forwarded information to federal authorities.

All three officers were flagged by the police early warning system, said the director.

The police director plans to address his officers at roll call on Friday afternoon.