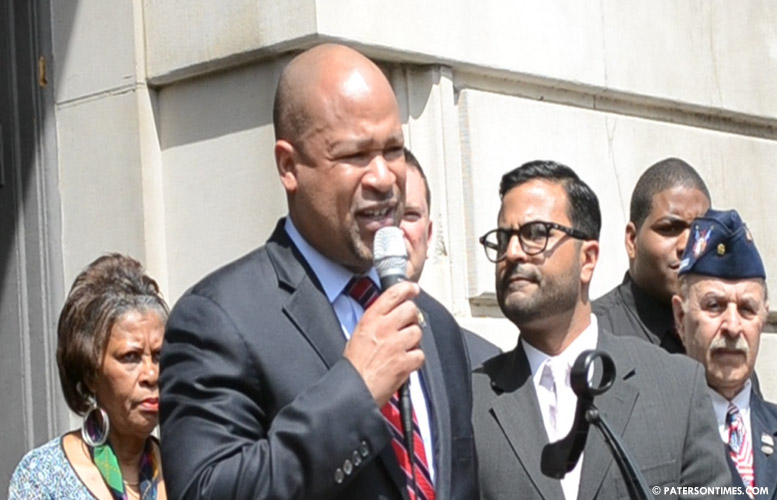 Sayegh received the assemblyman’s support last Friday at an event at the Hamilton & Ward Banquet Steakhouse in downtown Paterson.

“Andre has proven his dedication to our city as well as our Paterson Public Schools and recreational programs,” said Wimberly in a statement released by the Sayegh campaign on Thursday morning. “I am supporting him because I believe he can do for all of Paterson what he has accomplished in the sixth ward.”

Wimberly cited Sayegh’s work in improving public safety, promoting economic development, and campaigning to bring together different ethnic segments as factors that led to the endorsement.

“I am honored to have the support of someone who is also dedicated to our city and has done so much for Paterson,” Sayegh said. “Assemblyman Wimberly has been a great champion for Paterson at the state level, and I look forward to continuing to work with Benjie to move our city forward.”

Wimberly won a seat on the City Council in 2010. After a brief time on the council, he became the assemblyman for New Jersey’s 35th legislative district in 2011. He worked as a teacher and coached football and baseball teams at Eastside High School and Paterson Catholic High School.

Wimberly is the city’s recreation coordinator.

The endorsement ceremony last week was low-key. Four years ago, Wimberly was among a large group of Democratic Party leaders to gather at the steps of the historic City Hall to endorse Sayegh.

Wimberly gave a tepid endorsement in 2014. As he spoke on the steps, Russell Graddy, a prominent African-American restaurateur, who at the time backed former mayor Jeffery Jones, shouted, “I’m telling you it’s not right! You said you wouldn’t do it!”

Graddy’s words and the tense environment at the endorsement event forced Wimberly to deviate. He had joined his party comrades that day with the intention to back Sayegh for mayor.

Some of Sayegh’s opponents reacted to the endorsement on Thursday morning. His opponents see this as a sign that the party is making a second attempt to control the city.

“It was expected,” said councilman Michael Jackson. “Benjie’s not a popular coach in the city. He coaches in Hackensack. But, he is a pretty popular guy because of recreation.”

“It’s déjà vu,” said former school board member Pedro Rodriguez. “We already know how much value political figures have in elections in Paterson that was demonstrated in the last election. The same thing that happened four years ago will happen on May 8th.”

Other candidates in the race are Alex Cruz, Alex Mendez, and William McKoy.

Four years ago, there was a backlash against the Democratic Party. All of Sayegh’s opponents joined together to oppose him. His campaign is hoping for a very different outcome this year.

“I believe he will move Paterson forward and make it a safer city for all our families,” said Wimberly.