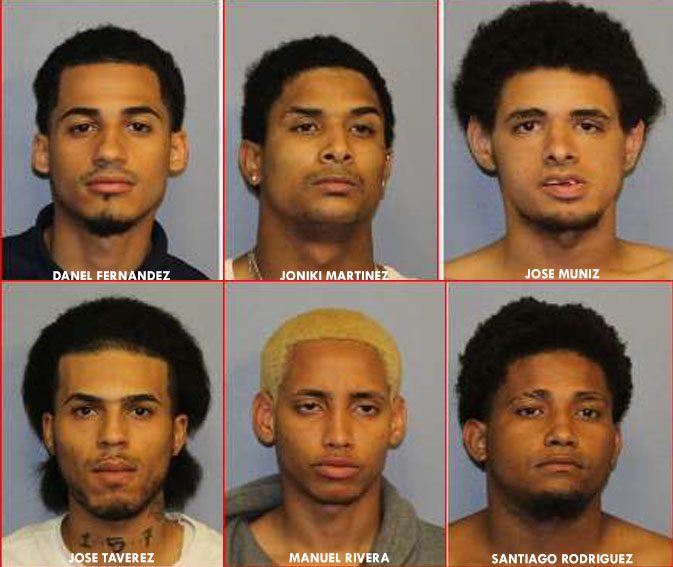 A city man was among six people arrested at a house controlled by a Dominican street gang on East 24th Street and 6th Avenue on Sunday afternoon in connection with the gruesome machete killing of a 15-year-old boy in New York City.

Jose Muniz, 21, of Paterson. And five others — Jose Taverez, 21; Manuel Rivera, 18; Danel Fernandez, 21; Joniki Martinez, 24; Santiago Rodriguez, 24 – from New York who were hiding out at the house were arrested.

Taverez, Rivera, Fernandez, and Rodriguez are from the Bronx while Martinez is from Freeport in New York, according to Passaic County prosecutor Camelia Valdes.

Police director Jerry Speziale said the New York City Police Department put out a “be on the lookout” flier that led to the arrests. Police surrounded the house little before 2 p.m. on Sunday, according to police.

“At the time, the house was loaded with people. One person jumped out of the second-floor window,” said Speziale. He said the suspect was arrested following a short foot chase.

The 15-year-old boy, Lesandro “Junior” Guzman-Feliz, was killed in a case of mistaken identity, according to news reports. He was dragged out of the Cruz and Chiky Grocery store on E. 183rd Street and Bathgate Avenue in the Belmont section of the Bronx at about 11:40 p.m. on Wednesday.

Five men reportedly belonging to the violent New York based Dominican street gang, Trinitarios, attacked the boy. One man is seen in a video repeatedly striking the victim with a machete. News reports say the killing may be related to a sex video circulating on social media that shows one boy rapping while a second boy has sex with a girl whose face is covered with a shirt.

The girl in the video is related to one of the suspects’, according to reports.

The victim ran to St. Barnabas Hospital two blocks away as blood spurted from his wounds. He later died.

An extradition hearing is scheduled for the six men before judge Ernest Caposela at the Passaic County Courthouse at 1:30 p.m. on Tuesday.

The gang has a strong presence in Paterson which has a large Dominican population. In 2018, the New Jersey State Police arrested nine members of the gang and seized eight kilos of cocaine and $76,000 in cash. In Sept. 2017, the gang was involved in a fight on Park Avenue that cut short the Dominican parade. In May 2017, a member of the gang was arrested for attempted murder. In 2012, gang members were accused of committing strong-armed robberies in Bergen and Passaic Counties.

The Trinitarios or 3ni operates on Market Street in the Sandy Hill section.