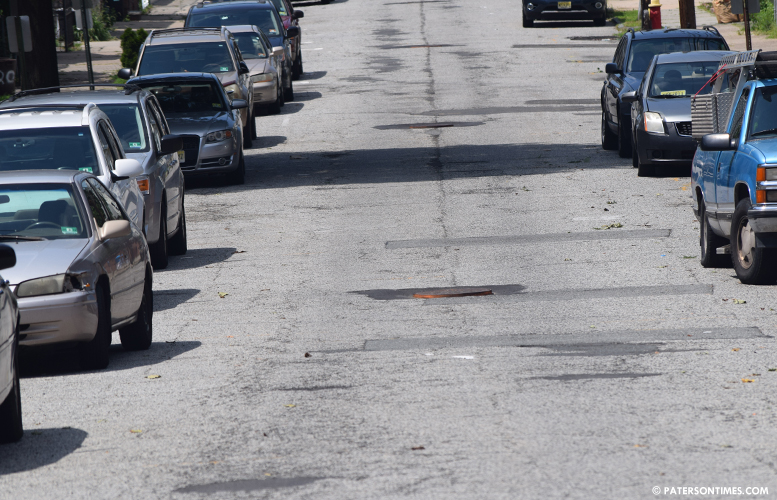 The city is moving to resurface two dozen roadways over the next five months, announced mayor Andre Sayegh on Wednesday afternoon.

Sayegh is targeting 23 roadways that have been the subject of many resident complaints. He recalled attending a celebration at the St. Bonaventure’s Church when parishioners approached him with a complaint and a question.

The worn-out and damaged blacktop on Danforth Avenue.

Public works director William “Billy” Rodriguez said the city is waiting for PSEG to complete its work laying gas pipelines before work can begin on repaving the actual roadway. He expects the pipeline work to be completed in September. Road resurfacing will commence in October.

“So many people came into church frustrated because they thought their cars were falling apart,” said Francis “Frank” McHugh, associate pastor for the St. Bonaventure’s Church. He said his parishioners will be happy to know city officials are listening and taking actions to address their concerns.

It was difficult to hear some speakers as cars zoomed past on nearby Route 80.

“When our community speaks. We as elected officials — we hear what you are saying and we respond to your request,” said Lilisa Mimms, councilwoman at-large.

Sayegh announces his road repair plan in front of the St. Bonaventure’s Church on Ramsey Street.

Some roadways have been untouched for years, said Ruby Cotton, 4th Ward councilwoman. “There are so many streets that haven’t been paved in 20-25 years,” she said referring to roadways in the 4th Ward.

The project covers 6.65 miles of roadway, according to public works officials.

“This is where it all emanated from,” said Sayegh referring to the complaints he received about Danforth Avenue at the church.

Danforth Avenue was placed on the list to be repaired using state grant funds in 2015.

The other 22 roadways being resurfaced are:

“Our goal is to finish at the end of the year,” said Sayegh.