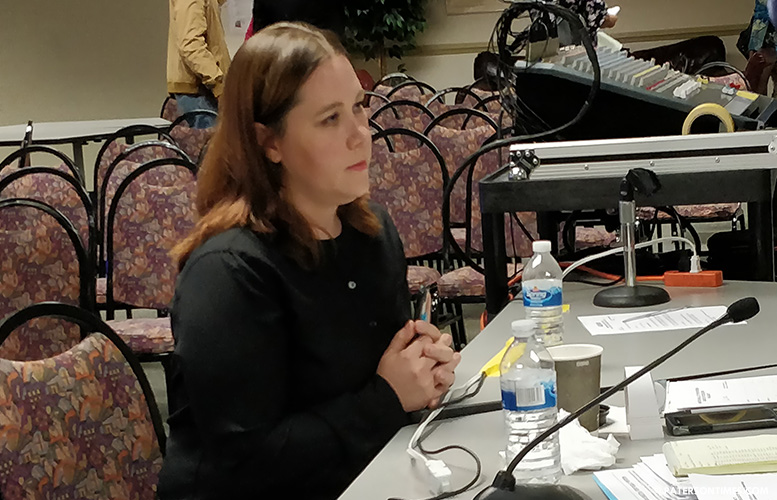 The school board picked Jessica Schutte, who has four children in the district, to fill councilman Flavio Rivera’s old seat on Monday night.

Schutte was appointed in a 5-2-1 vote. She will serve on the board for the next four months or the first half of the 2018-19 school year.

“I was surprised. Very surprised. I thought it was a longshot,” said Schutte, 35, reacting to the board’s vote. School board members spent 25 minutes behind closed-doors in deliberating.

Schutte, who was one of five people interviewed for the vacant seat, had a simple pitch. She told the eight board members she has four children in elementary school. Her kids attend School 2, she said.

“I see things from a different perspective,” said Schutte, who handles procurement for Paterson Habitat for Humanity. “It’s one thing to implement action or changes — but you don’t really see how that impacts the children unless you have a child that’s coming home struggling or excelling.”

As a parent Schutte sees some of the district’s shortcomings. For example, some students, who the district says are average at a certain grade, are sometimes academically two grades behind, she told the school board during her interview.

Martinez nominated her for the appointment. Capers nominated former school board member Corey Teague for the seat.

Each of the five candidates were asked nine questions. Some struggled with some of the questions. For example, Heru Keonté, Eqbal Ahmed, and Schutte could not provide a definition for Quality Single Accountability Continuum (QSAC), a metric the state uses to give grades to school districts.

Keonté is a teacher at the John P. Holland Charter School. Ahmed is a senior at Montclair State University, where he is studying accounting.

Teague and police officer Eddy Pichardo provided accurate definitions for QSAC. Pichardo said he researched the term beforehand. Both men are running for seats in November.

Pichardo told the school board his 12 years of experience as a police officer would inform his decision making. As a patrolman, he sees many young people, who he has interacted with while working off-duty at schools or seen going to and from school, end up on the street corners.

His opening statement bowled over some school board members. He told the board he will be an advocate for the city’s young people to steer them away from the streets.

“There’s more to life than hanging out in the corner, selling drugs, robbing people, or committing crimes, which majority of our kids are doing now, unfortunately,” said Pichardo.

Some of the school board members, who have, in the past, criticized their colleagues for going along with the Passaic County Democratic Party’s pick to fill vacancies, said this selection was unique.

Hodges said the party did not appear to have a hand in Schutte’s selection. Teague, who accused the party of orchestrating a sham process to fill school board vacancies in the past, concurred.

Rivera vacated the seat after winning a seat on the City Council in May. The board waited until candidates had turned in petitions to run for the November election before opening up the process to fill the vacancy. This means Schutte won’t be able to run in November to continue to serve.