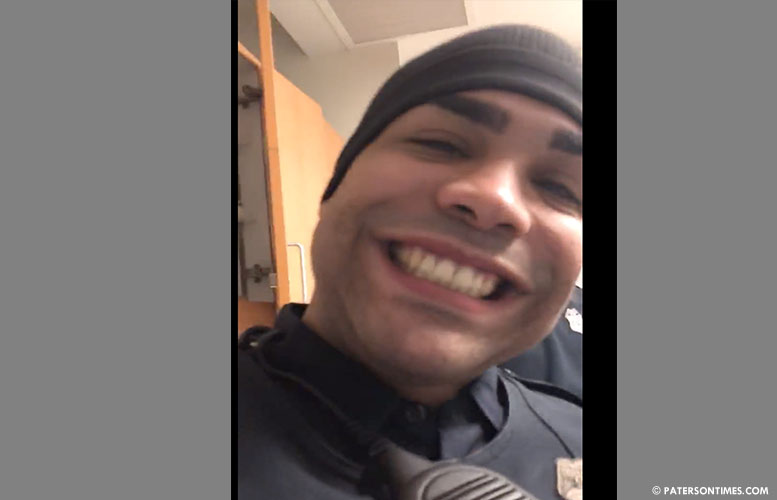 A federal judge sentenced police officer Roger Then, one of six officers ensnarled in an FBI corruption investigation, to six months in prison on Tuesday afternoon for covering up his partner’s assault of a suicidal man at St. Joseph’s Regional Medical Center.

Then, 29, of Paterson, had pleaded guilty to misprision of felony for concealing the civil rights violation committed by police officer Ruben McAusland. McAusland was sentenced to five and half years in prison for the vicious attack captured in two videos and dealing drugs using his squad car.

“I should not have allowed McAusland to hit the patient,” said Then. “I’m just asking everyone to forgive me and I’m sorry for what I did.”

Then’s attorney John McGovern argued the person smiling in the video just before McAusland viciously slaps the victim, Andrew Casciano, twice across the face is not his client. He told the court Then has three children, served in the Iraq War, and is in the United States National Guard.

McGovern argued the environment in the police department changed Then. He appeared to blame McAusland.

“He tried to get out from under his [McAusland] tutelage,” said McGovern.

“He thought it was funny,” said judge William Walls referring to the video where Then has a smile on his face before his partner attacks the victim.

McGovern said Then thought the exchange between McAusland and Casciano was “ridiculous” and that’s why he recorded the interaction using his cellphone.

“I did not record because I wanted to laugh at the patient getting hit across the face, I recorded because of how absurd the patient and McAusland sounded arguing back and forth like children,” said Then. “I did not know McAusland was going to hit the victim prior to recording. At that moment I froze in shock.”

The charges against Then and McAusland stemmed from a Mar. 5, 2018 incident at St. Joseph’s Regional Medical Center. Both men responded to a call from an attempted suicide victim, who had been picked up by ambulance and taken to the hospital.

Then and McAusland responded to the victim’s home and followed the ambulance to the hospital to monitor him.

A pair of videos captured at the hospital that night showed the victim, Casciano, in a wheelchair. In the first video, the victim throws an object down the hallway. Angry at the victim’s conduct, McAusland pushes the wheelchair with his hands and punches the victim in the face.

As the victim fell towards the ground, Then grabbed him by the back of the neck and pushed him to the ground.

McAusland puts on a pair of gloves and violently strikes the victim twice across the face.

Then and McAusland submitted false police report omitting their attacks on the victim, according to the FBI.

Casciano sustained injuries to his face and required surgery. He continues to suffer from headaches and post-traumatic stress disorder. His attorney is expected to file a lawsuit against the City of Paterson seeking an unspecified amount in damages for the incident.

Then and McAusland are two of six police officers ensnared in the corruption probe. Others are Daniel Pent, Jonathan Bustios, Eudy Ramos, and Matthew Torres.

Police brass have said the FBI investigation originated from within the department.

Then failed to report the incident

Then isn’t going to prison for recording the incident, but for omitting the assault from his report.

“He saw that conduct, recorded it, but did not report it,” said assistant U.S. attorney Rahul Agarwal.

Then tried to cover up for his partner, but in court he said McAusland was his superior officer and that he had to follow his commands.

“I had to do what he asked,” said Then. He also stated he worried what others in the police force would say had he reported the incident.

Agarwal pointed out Then played a role in the initial attack on the victim. After McAusland punched the victim in the face, badly damaging his eye socket, Then grabs him by the back of the neck and pushes him to the ground.

McGovern argued for a probationary sentence, but the government suggested six months to deter other officers from covering up crimes.

Walls agreed with the government.

“It will stop others from hiding things they should not hide,” said the judge. At one point the judge directly addressed Then, “You go to jail because you let us, society, down.”

As the judge pronounced the six-month sentence, Then’s wife, sole member of his family in courtroom, began to weep.

Walls also sentenced Then to one year of supervised release. Then also has to pay $32,892 in restitution to the victim.

Then will have to surrender to the Federal Bureau of Prisons on Jul. 15 to serve his sentence.

“All for not being honest,” remarked the judge while reading the sentence.