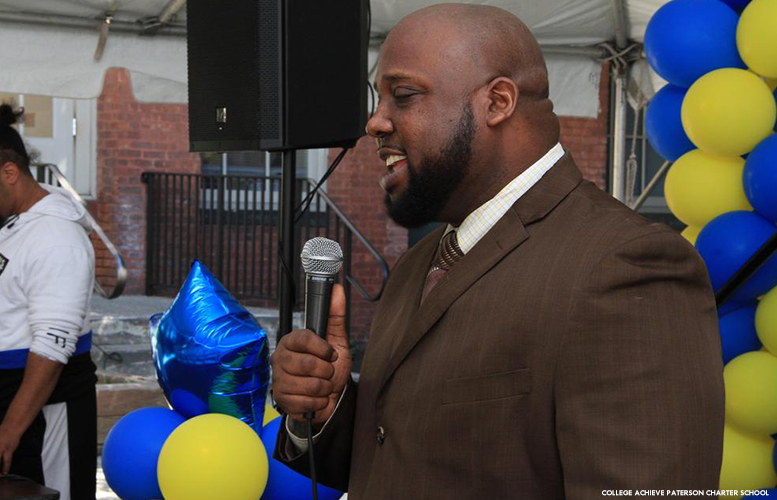 Henry McNair, controversial principal of College Achieve Paterson Charter School, allegedly licked the face of a female subordinate at the now-defunct Newark Prep Charter School leaving her in a state of shock, according to deposition transcripts reviewed by the Paterson Times.

McNair allegedly engaged in the behavior at a school function in 2017. Target of his alleged behavior was Naquana Haynes, a physical education and health teacher at the Newark Prep Charter School.

“We were at the senior barbecue and I went over to ask him something and he said come here and he licked my face,” said Naquana Haynes. She mentioned the incident during a deposition in the Zaquina Zackery case.

Zackery has accused McNair, who was the principal of the Newark Prep Charter School from 2015 to 2017, of groping her 20 times, according to court records.

McNair did not respond to a message left at the College Achieve Paterson Charter School seeking his comments for this story.

“I think I was in a state of shock,” said Haynes at the deposition. She “walked off” the event and avoided interactions with him thereafter.

Haynes viewed McNair’s conduct as inappropriate, but did not report the incident. She said the incident happened 20 days before the school was slated for permanent closure. The New Jersey Department of Education closed down the Newark Prep Charter School on Jun. 30, 2017 for failure.

Haynes stated McNair was “prominent” in Newark and in education circles, but did not go so far as to say she feared retaliation from McNair. She said McNair wrote her recommendation letters while she was searching for another job.

“Here you’ve got a guy that was fired from the University High School for inappropriate relationship with one of the employees. Fired from Trenton for posting a vulgar photograph on his Facebook. And he has a DYFS investigation because he touched a child inappropriately,” said Mark Mulick, attorney who is representing Zackery in a case against McNair and the Newark Prep Charter School.

Haynes saw the incident where McNair licked his finger and touched a girl’s face. The incident involving the girl at Newark Prep was reported to the state by the school’s vice principal. McNair admitted the state conducted an investigation and issued him a warning.

Despite McNair’s troubling past, the College Achieve Paterson Charter School hired him as principal for $123,600 a day after the Newark Prep Charter School was shuttered.

“How did they hire him? This guy has got some sort of connection somewhere,” said Mulick. His connection is Gemar Mills, who is the executive director for the College Achieve Paterson Charter School.

McNair lists Mills as a reference on his resume.

The sexual harassment allegations against McNair prompted the College Achieve Charter School network to open an investigation. It’s not clear whether that investigation has been completed.

Michael Piscal, who runs the College Achieve network, did not respond to a request for comment for this story.

“My only take now is he must have something on them. He probably has some stuff on them that they don’t want him to come out with,” alleged former school board member Corey Teague, a critic of charter schools. “I don’t see any other reason for them to keep him amidst all of that.”

Teague said people have been fired from their jobs at schools for lesser offenses.