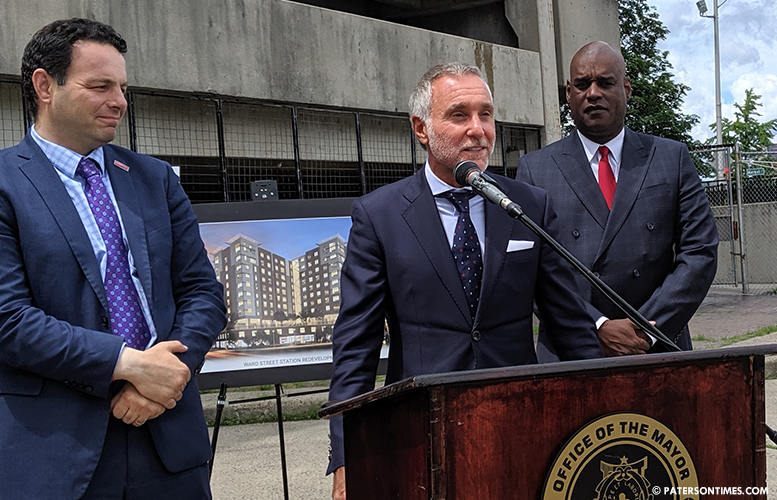 Hudson County developer Anthony LoConte has proposed building an 11-story apartment complex on Ward Street, across the road from the Paterson Train Station, that will contain 160 residential units and a 10,000 square feet of retail space on the ground floor.

LoConte’s $34.3 million proposal was one of two submitted to the Paterson Parking Authority for a development project next to the proposed new parking deck on Ward Street and Memorial Drive.

“I think we struck gold with the magnificent human being by the name of Tony LoConte who has really enriched us with his commitment to the city,” said Tony Perez, director of the Paterson Parking Authority, standing in front of the soon-to-be demolished Ward Street garage on the corner of Ward Street and Memorial Drive, to announce the winner of the request for proposal (RFP) process to select a developer for the site, on Friday afternoon.

“I’ll try to do the best job I can to really help bring back Paterson,” said LoConte, pictured, who has 30 years of experience building projects throughout the region.

LoConte’s proposal submitted to the Paterson Parking Authority states the living units will be smaller than usual — 423-842 square feet each – to keep the units affordable and target single young people looking to take advantage of the Paterson Train Station.

There will be 64 studio, 32 one-bedroom, and 62 two-bedroom units, according to the proposal. The project also includes a food hall, a fashion-focused micro business incubator, and co-working space.

LoConte expects to break ground on the project in the next eight months. He said the project will be finished in two years. He is not seeking any federal, state, or municipal incentives for the building. However, he intends to seek a tax abatement or payment in lieu of taxes (PILOT) agreement with the city.

Curiously, no members of the City Council, who have to approve a possible PILOT agreement, attended the mayor’s press conference to announce the winner of the proposal process. A week earlier, the Paterson Times reported LoConte had been picked for the development project.

Sayegh said LoConte will take on other projects in Paterson. He owns a property on Essex and Straight Street. “He’s going to be a major part of Paterson’s renaissance,” said Sayegh. LoConte plans to build commercial and light industrial complex at the site.

Long before he was picked for the project, LoConte had been making his presence felt in Paterson. The LoConte Family Charitable Foundation gave $1.5 million in 2016 to support the construction of the Santo LoConte Center for Safety, Resiliency, and Advocacy at St. Joseph’s Children’s Hospital. The center is located on Barclay Street and is under construction.

The Paterson Parking Authority has faced questions over the past year as it attempted to find a developer to build on the site. At first, Perez did not want to conduct a request for proposal (RFP) process, but he was forced to after prominent developer Charles Florio accused him and the Sayegh administration of attempting to do a backroom deal.

Florio proposed to build a $40 million mixed-use project at the site. He offered to pay $3 million for the site. His proposal and offer were rejected because it was late.

Perez said his team will negotiate to determine the price LoConte will pay for the site. He is looking at a down payment and a long-term lease.

“You pitch an idea and negotiate price? How did you knock the other guy out of the box if you don’t know a price?” said Florio on Friday.

Florio said he is not against LoConte. He said he hopes the city doesn’t give the site for free to a developer.

The other proposal came from Blue Onyx Companies.