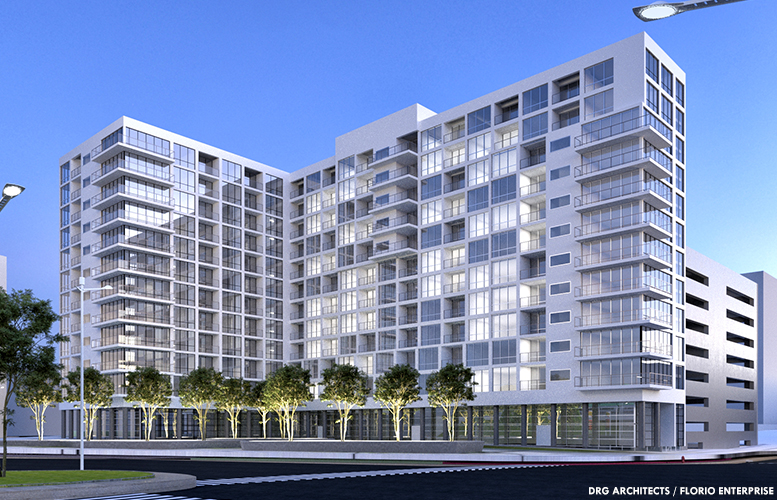 Prominent developer Charles Florio proposed to build a 12-story mixed-use building for approximately $40 million close to the proposed new parking garage on Ward Street, but the Paterson Parking Authority has rejected his offer.

Florio offered to purchase two lots for $2 million in a letter dated Jun. 6 for the project after the Paterson Parking Authority sought proposals from developers for the area. His offer had to be rejected because it was not submitted on time, according to both the agency’s executive director Tony Perez and board chairman Dwayne Cox.

“Unfortunately, your proposal was not submitted timely and therefore is not eligible to be considered by the Authority and must be disqualified. Further, to consider your proposal at this time would corrupt the integrity of the RFQ/RFP process,” wrote Glenn F. Scotland, redevelopment counsel for the Paterson Parking Authority, in a letter dated Jun. 12.

Responses to the request for proposal were due on May 20. Florio acknowledged his offer is “technically” late. However, he said he had expressed interest in the project long before anyone else, noting that he had provided details and pitched the project to the Paterson Parking Authority last year.

“I was the first guy in the room,” said Florio. “I pitched a year ago.”

Florio said his project is a 12-story building that covers 163,000 square feet. It has 176 apartments, exercise room, bike room, three 1,700-square-foot retail spaces, and one 4,300-square-foot restaurant. Estimated cost is $40 million. He is not seeking tax credits or a tax abatement from the city for the project, he said.

On Thursday morning, Florio upped his offer to $3 million for the two lots. He said the Paterson Parking Authority extended its deadline for proposals before and should do it again.

“Extend your RFP and take $3 million,” said Florio. He said he will wire the funds within a week.

Florio had accused the Paterson Parking Authority and mayor Andre Sayegh’s administration of trying to make a backdoor deal to dispose of the site to a handpicked developer at the public’s expense.

“I was told not to make an offer,” said Florio speaking of what officials told him last year. “Then they put it up for an RFP only because I had thrown it out there that they were doing backdoor deals.”

Perez put out an RFP after Florio publicly questioned the process.

Florio said his offer gives the greatest benefit to taxpayers. Perez would not make public the two other offers received by the Paterson Parking Authority. One firm is BlueOnyx. Perez would not identify the second firm. Florio said it’s Hudson County developer Tony LoConte.

Cox said both companies have made presentations to the Paterson Parking Authority.

However, Florio said Perez already struck a deal with LoConte. He accused the Paterson Parking Authority and the Sayegh administration of “playing games.”

Sayegh had defended the agency’s closed process last year. His administration also conducted a closed process to give out $130 million in state tax credits.

Neither Sayegh nor his economic development director Michael Powell responded to calls for comment on Thursday.

Sayegh’s administration faced questions from the City Council for the closed process on Wednesday morning. His business administrator Vaughn McKoy said the administration didn’t have time and did not have to put out an RFP.

Adofo-Wilson couldn’t answer how much he and his co-developer Joseph Portelli of RPM Development Group would contribute to the project. Adofo-Wilson is a former Newark deputy mayor. He is also a lawyer who works for Rainone Coughlin Minchello, a law firm that lists New Jersey Assembly speaker Craig Coughlin as a partner.

Florio’s letter making the offer copied in the mayor and council members. Council members said they were not fully made aware of the process.

Councilman William McKoy said he needed to see the RFP the agency advertised. He said the RFP would state whether the agency was seeking a partner or trying to sell the site to a developer. Perez did not respond to an email seeking a copy of the RFP his agency put out.

“You know I have my reservations about the Paterson Parking Authority,” said councilman Flavio Rivera. “I’m questioning the decision making. A lot of the decisions they make don’t have the best interest of the public.”

Rivera suggested the Paterson Parking Authority consider Florio’s offer so long as it is within the law.

“This administration once again has disrespected me. It’s going to be the last time they do so,” said Florio, who was responsible for the downfall of former three-term mayor Jose “Joey” Torres, in an ominous remark.