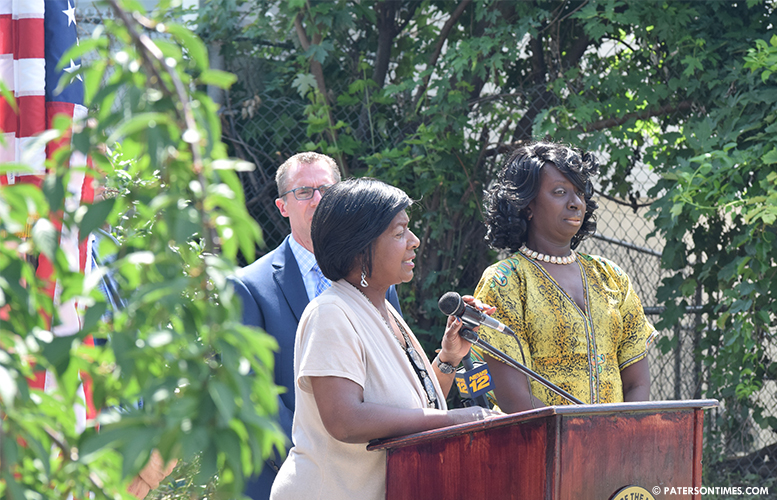 A park created to honor the legacy of Martin Luther King, Jr. across the street from the church where he delivered a speech a week before his assassination, will feature an eight-foot tall bronze statue of the civil rights leader.

Officials broke ground on the construction of the park – on a pair of empty lots, one 47×56 and another 30×53 — in the corner of Auburn and Governor Street on Friday afternoon. It will also feature a mural by a local school teacher, rain garden, walkway, and pathway with King’s sayings.

A little library, an iron fence, gate, and two lamp posts will be installed at the Martin Luther King, Jr. Park.

“It is going to be a great asset in this community. Everybody that comes to this park will appreciate what’s going on here. We pray it will uplift this community,” said pastor Allan Boyer of the Bethel AME Church.

King visited Boyer’s church, then called Community Baptist Church of Love, at 2 Auburn Street on March 27, 1968. He spoke for about 20 minutes to drum up support for his Poor People’s Campaign.

The park was created five years ago, but little happened until the Paterson chapter of the Habitat for Humanity and a dozen partners revived the project last fall. Holly, redbud, and weeping cherry saplings were planted last November to reboot the project. All of the trees survived the winter.

“We’re finally seeing it get off the ground,” said councilwoman Ruby Cotton of the 4th Ward.

“We had to fight for this,” said mayor Andre Sayegh. There will be no more delays, he said. “It’s going to end this year.”

Sayegh said the park will be completed in August.

The park’s price tag is $235,000, said Veronica Rogers of Habitat for Humanity, project manager for the park. She said the park received $95,000 in Passaic County Open Space funding and the rest are in-kind contributions from various partners.

Rogers said volunteers will work on the project every weekend until the park is finished. She said the bronze statue is being created by Stan Watts of Utah.

Habitat for Humanity has been building new homes for families in the downtrodden neighborhood for decades.

Ruth Mejia lives in one of those homes on Godwin Avenue. She welcomed the new park in her neighborhood.

“This is the park where my children can come and play,” said Mejia. She has four kids. Her sister, who lives across the street, will also visit the park, she said. “You work for beautification; you work for the change.”