Mayor Andre Sayegh secured the City Council’s precursory support for a lease agreement for the restoration of the historic Hinchliffe Stadium on Tuesday night.

Council members granted preliminary ratification for the lease between the city and the school board in a 5-4 vote.

A public hearing and final vote on the ordinance is scheduled for Sept. 24, 2019.

Jackson attacked the project by arguing it creates little economic activity for the area and very few jobs. The project is expected to create 150 temporary and 40 permanent full-time jobs, according to developer Baye Adofo-Wilson.

Jackson called the 50 full-time jobs expected to be created at the completion of the $76.8 million project an “embarrassment.” He also said the price tag for the project is too high. He claimed the per square foot cost for the housing portion of the project exceeds $800.

“How long are we going to foolishly spend money without holding people accountable?” said Jackson. He pointed out state tax credits and public grant dollars will fund the entire project.

“I don’t know where your numbers are coming from,” answered Michael Powell. He handed out a sheet of paper that showed the per square foot cost for the housing portion at $290.

Sayegh earmarked $50 million in state tax credits towards the project.

Mimms said the developer and the administration did not adequately address a series of her questions. She also said the Sayegh administration excluded her from giving her input to the project.

“Shame on you. Shame on your administration,” Mimms told Sayegh at the meeting.

Council president Maritza Davila said the Economic Development Committee reviewed and modified the redevelopment agreement for the project. She pointed out only four council members are on that committee. Mimms is not one of them, she said.

Under the changes, the city will no longer be required to take on debt to support the renovations. The low-income housing component has been changed from family to senior housing. And a daycare center has been added to the proposal.

Other council members spoke in favor of the project.

“It’s definitely a better project than before,” said Davila.

“It’s an eyesore,” said Al Abdelaziz, 6th Ward councilman, speaking of the stadium that has been in a state of disrepair for more than 20 years. “When you have a functioning field, it transforms the neighborhood.”

Abdelaziz said when football players and band members with trombone are practicing at the field drug addicts and dealers won’t want to be in the vicinity.

“The administration has no Plan B,” said Flavio Rivera, councilman at-large. “They don’t have another project.”

Luis Velez, 5th Ward councilman, blamed the mayor for failing to seek proposals from multiple developers for the renovation project. Sayegh has faced criticism for lack of transparency. For example, his administration refused to share the redevelopment agreement document with council members until the lease agreement was voted down in June.

Sayegh hand-picked developer Adofo-Wilson, who previously defaulted on a loan in 2011, without opening up a competitive process. His risky moves could still jeopardize the project.

“I have faith in the young man. He’s going to do the right thing,” said Ruby Cotton, 4th Ward councilwoman, referring to Adofo-Wilson.

“Ladies and gentlemen. This is the last train leaving this station going in the direction we want to go,” said William McKoy, 3rd Ward councilman. “I think we need to get on board.”

Mimms had previously voted in favor of the lease agreement.

Since the rejection in June, Sayegh has been cajoling council members to secure their support for the agreement. Some pointed out Sayegh dedicated the Great Falls Festival to Davila and his controversial One Paterson group paid for the shipment of a donated ambulance to the Dominican Republic for Rivera. And he appointed McKoy’s son to the Parks and Recreation Commission. 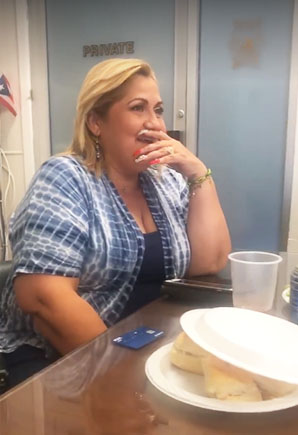 Davila’s reaction when Sayegh tells her the annual Great Falls Festival will be named in her honor.

Both Davila and Rivera voted against the agreement in June, but changed their positions on Tuesday night. McKoy’s position remained unchanged. On Tuesday, the mayor spent the day lobbying council members to ensure there were enough votes for the measure to pass.

Both Davila and Rivera justified their support by pointing to the changes made in the redevelopment agreement. Rivera pointed to the removal of a portion that required the city to borrow money for the project.

Sayegh said the sorry state of the Hinchliffe Stadium symbolized the “decay and decline” of Paterson for 22 years. He also pointed to the historic significance of stadium, one of two remaining in the U.S. where the legendary Negro League held games.

“That stadium needs to be brought back to life,” said Sayegh.

Municipal officials and the developers will present the project to the New Jersey Economic Development Authority (EDA) on Wednesday. Officials hope to get the EDA to consider tax credits for the project in October.