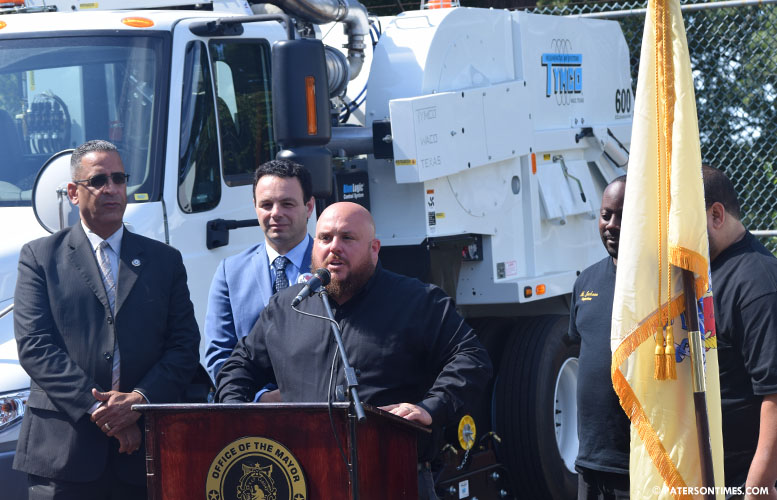 Mayor Andre Sayegh showed off a pair of new street sweepers at the public works headquarters on Friday morning while promising residents regular and consistent street cleaning throughout the city.

Sayegh acknowledged his administration has gotten a large amount of complaints from residents unhappy with poor and inconsistent street cleaning.

“Adding these two new sweepers enhances our fleet. We will be at full force,” said Sayegh standing in front of the two new machines at Eastside Park. “We want to better serve our residents. We want them to see a return on their investment.”

Municipal officials ran into problems with the lease-purchase financing of the machines leading to delays.

“I think this is a great step for Paterson. It shows our initiative to keep the city clean,” said public works director William “Billy” Rodriguez (pictured at podium). The city received 2 machines three months ago and 2 more on Thursday, he said.

Rodriguez described the Tymco machines as “superior” because of their suction strength. These machines require far less maintenance than the European machines, according to officials.

The city deploys seven machines on a daily basis. This leaves one spare machine for parks or for substitution in case a machine breaks down.

“Now you got equipment. Now you got what you needed — go out there and kick butt,” said councilman Luis Velez, vice chairman of the public works committee. “This will lift the morale of the department.”

“Hopefully our streets will be cleaner than ever,” said Velez.