In two debates, Paterson school board candidates face off on issues | Paterson Times 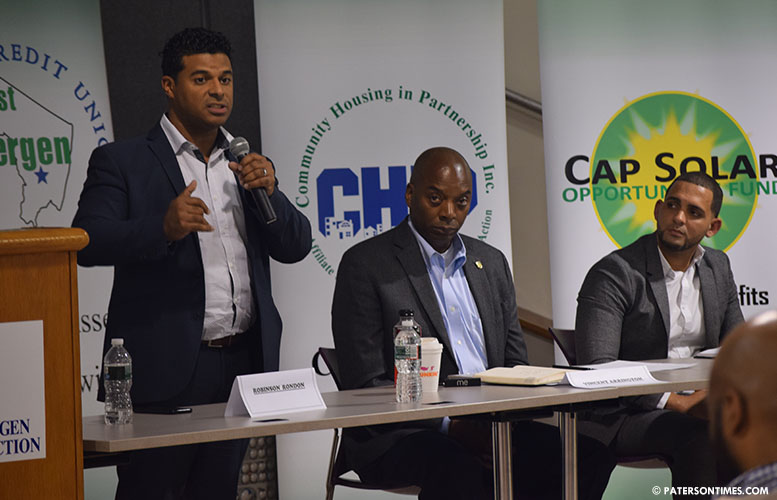 A pair of debates allowed seven school board candidates to share their platforms with voters this month.

Abreu’s answer was that he will “follow-up” and fix what is broken.

“Our teachers are teaching kids for tests,” said Vincent Arrington (pictured, middle), a technology manager at UPS. He said that takes away from learning in the classroom. He favored reducing the number of tests.

“I’m kind of on the fence,” said incumbent Emanuel Capers. He said standardized test scores should not be used to evaluate teachers. “We do need testing to see where our kids are performing.”

“Not all children are good test takers,” responded Dania Martinez, a social worker. She said her children opted out of the Partnership for Assessment of Readiness for College and Careers (PARCC) exams. “We should find different methods to challenge our children to improve academically.”

Former school board member Corey Teague opposed standardized testing. He pointed out he went to Trenton to protest PARCC exams and opted his children out.

The candidates were asked about the budgeting process. The incumbents, Rondon and Capers, used the chance to point out both voted against the current year’s budget.

Rondon said he opposed the budget that had a 14-percent tax increase.

“We have to be fiscally responsible,” said Capers. He said he opposed a new program that was proposed to turn Garrett Morgan Academy from engineering to a community service school to avoid unnecessary expenditures.

The challengers struggled to answer a question about the Amistad law which requires New Jersey schools to teach about black contribution to American history.

“I’m not familiar. If elected, I’ll do my homework,” answered Abreu.

“It’s something I will educate myself on,” said Martinez.

Capers, who championed full implementation of the Amistad curriculum, appeared to slam both for their answers.

“Board members need to know that. If you don’t know the law where are we at?” remarked Capers.

The school district is ahead of others in New Jersey in implementation of the Amistad curriculum.

Abreu’s answer was more recreation when asked about comprehensive and targeted schools.

“This has nothing to do with the question,” Capers lashed out at Abreu. He said the district has many team supports and other youth sports programs.

Abreu had used recreation as his answer for several questions during the course of the debate.

Capers named some of the schools that need targeted support.

Schools on the targeted or comprehensive list are the lowest performing schools in New Jersey.

Teague and Martinez did not answer the question. Teague, who previously served a stint on the school board, talked about special education.

Candidates were asked which outdated policies they would attempt to change if elected.

“We have to change the way we look at discipline,” said Teague. He said disciplinary policies are too punitive.

Arrington said the district’s technology policies require changes. He said a policy need to be added that allows students to take laptop and tablets home.

Abreu found himself in trouble again when asked about the so-called school-to-prison pipeline. He said it was a “program.”

“We have to look for a better program,” said Abreu. “Get elected and I’m going to work on that.”

His running mate Martinez said restorative justice, a practice that is being tried at the school district, will help to tackle the school-to-prison pipeline.

Over the summer the district trained three hundred staff members in the Mental Health First Aid.

Martinez has argued for more social and emotional programs at the district at the Paterson Education Fund debate at John F. Kennedy High School last week.

At that debate, Martinez also shared her personal story.

“I was told I was a statistic of failure,” said Martinez. She became pregnant during her senior year in school, she said.

Martinez went on to obtain a bachelor’s degree in Spanish and master’s in social work.

The newcomers struggled at the first debate.

Abreu answered just about every question by stating he would increase recreation.

The newcomer with the strongest showing in the first debate was Iris Rigo. A mother of three district students, she condemned the current regime running the school system.

Rigo called the big class sizes at the district a great “shame.” She said she wants to be the voice of parents and children in the district.

Rigo said she often hears schools lack basic supplies. “It made me so mad to hear that stuff,” she said.

Rigo was absent from the second debate. Her running mate, Rondon, said she was getting her appendix removed at the hospital.

The school board election is on Tuesday, Nov. 5.