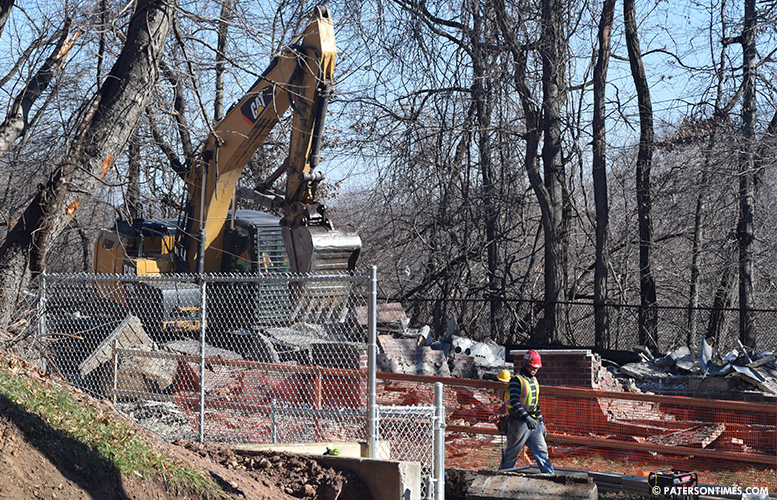 Demolition is expected to take six months, said Israel Roizman of Roizman Development which is undertaking the approximately $105 million construction project at the 17-acre site. He said 30 buildings have to be knocked down. Site preparation work, road work, sewer and plumbing, and electricity work is being done simultaneously with demolition, he said.

Roizman said groundbreaking will likely be held in March.

“It’s a good sign that they have started. The property has been derelict and vacant for some time,” said councilman William McKoy. He represents the 3rd Ward where the project is located. Over the past decade, the rotting housing complex became a magnet for drugs and gun violence.

McKoy said the proposed development will provide much needed housing. He also pointed to the opening of the area through new roadways. The previous development had many dead ends and the complex was isolated from the existing neighborhood. Proposed senior low-rise and the townhomes will be better integrated with the existing neighborhood, he said.

“They did 2 or 3 buildings,” said Lilisa Mimms, councilwoman at-large, speaking of demolition. She lives half-block away from the development. “I’m glad they started the process. I pray it stays on task without delays or additional costs.”

Irma Gorham, director of the Paterson Housing Authority, had hoped to demolish the development in summer of 2017 and start construction in the fall of that year. However, she ran into delays in moving the existing tenants from the building.

Federal officials approved the demolition in Jul. 2018. Next month, the U.S. Department of Housing and Urban Development (HUD) gave $1.54 million in housing choice vouchers to the Paterson Housing Authority to relocate remaining residents out of the development.

In the first phase, Roizman will build 81 senior citizen units in a low-rise building that is expected to be finished by Jul. 2021. In the second phase, he will build 160 family apartments in townhouses which is expected to be finished by Jun. 2022. The project includes a community center. Separately, the Paterson Housing Authority plans to build 55,000 square feet of retail space fronting Route 20.

Much of the funding for the new 246-unit housing development will provided by the New Jersey Housing and Mortgage Finance Agency (HMFA) and other low-income tax credits, according to officials. Roizman Development will receive an almost $13 million developer’s fee. Paterson Housing Authority is leasing the 17-acre site for 15 years for $1.4 million to the firm.

“We’re looking forward to the quality housing that will be brought back to that area,” said McKoy.