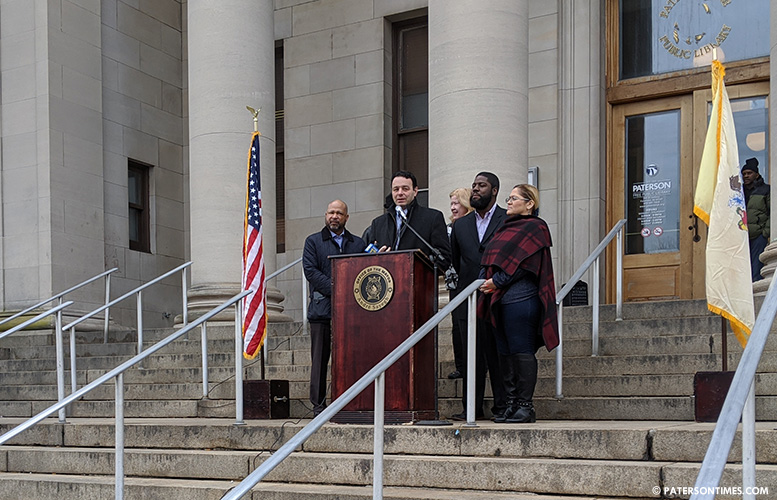 The opening of a reentry center at the Danforth Memorial Library, which will provide employment referrals, job training, GED classes, and other services to assist ex-prisoners become productive members of society, has been pushed to March.

Library director Corey Fleming said the reentry center will open on Mar. 2. Previously, officials had said the center would open in mid-January; however, some City Council members raised questions about having a reentry program at the library on Broadway.

Municipal officials said the delay is due to staffing. Social workers for the program are currently being hired. Paterson is one of six entities in New Jersey to be part of the New Jersey State Library’s “Fresh Start @ Your Library” initiative. State library is funding the initiative at the six library systems using a $628,774 grant from the Institute of Museum and Library Services.

Municipal officials held a press conference on Wednesday morning at the steps of the historic library on Broadway to announce the initiative.

The library provides access to computers and other resources for residents to put together a resume and apply for jobs over the internet.

“Libraries have a history of welcoming everyone,” said Peggy Cadigan, deputy state librarian and Fresh Start @ Your Library project director at the New Jersey State Library.

The center will serve residents from throughout Passaic County. Fleming did not have an approximate number of people the library will serve in a given week.

“We as a community cannot turn our back on people who have fallen on hard times,” said councilwoman Ruby Cotton.

New Jersey State Library will also pay for GED prep materials and testing for 50 former prisoners or “returning citizens” at each of the libraries.

Grant funding for the reentry center runs for two years.