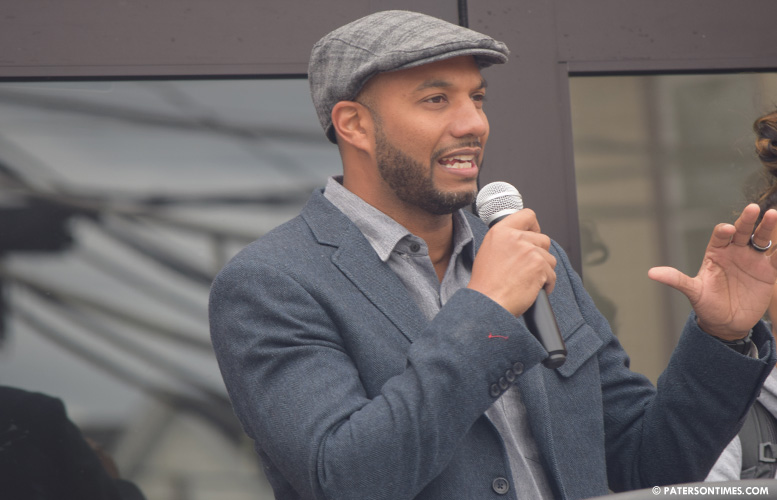 Passaic County freeholder Theodore “TJ” Best called mayor Andre Sayegh a “slimy coward” and a “punk” who is “out of touch” with the plight of residents in a Facebook post on Thursday night after the mayor made comments about his handling of the coronavirus pandemic on national television.

In his interview with Chris Hayes on MSNBC, Sayegh states the city managed to control the spread of the new coronavirus using the Paterson Strike Team by conducting aggressive contact tracing.

The city’s data officer projected Paterson would have 8,000 positive cases by April 15, but the city had 2,500 cases by that date, says the mayor in the interview. A Paterson Times news story from April 15 shows Paterson had 2,228 verified infections and 61 deaths.

“It could have been far worse,” said Sayegh.

“Did he really just say Paterson only has 2,500 positive cases of Covid19? Last time I checked it was 6,000 confirmed with an estimated true number of 15,000 using most models,” Best (pictured) wrote on his Facebook page.

Sayegh wanted Best to take down the post, according to sources. But the freeholder refused.

“Correction, the mayor of the city of Paterson Andre Sayegh is a self serving, credit seeking slimy coward. Because we are facing a pandemic I’ve tried my best to not be too critical or let my personal feelings get involved,” wrote Best in the post. “The truth is Andre Sayegh is a punk, he will do or say anything to serve himself. He is out of touch with the reality of City residents and if he has a problem with anything I said I gave him my address he can come see me or we can meet anywhere he likes.”

Sayegh and Best have had a strained relationship over the years.

Best, who resides in Paterson, has been critical of the mayor’s handling of the pandemic over the past weeks. For example, Best pointed out there was little social distancing going on in the city of 150,000 people, suggesting the mayor has been failing to enforce the governor’s stay-at-home order.

Others have also criticized the mayor’s handling of the pandemic. Just about every week City Council members have slammed the mayor for his handling of the pandemic. Many attacked him for his failure to set up coronavirus testing sites in March and April. He managed to get testing going in May, but those efforts were badly bungled. Last weekend, half of the mayor’s testing sites closed because of problems with a firm his administration hired to run them.

Sayegh has been attempting to change the narrative through a series of social media videos, opinion pieces, and media appearances.

Only exception to the widely viewed poor response has been the Paterson Strike Team. The mayor credited the team in the MSNBC interview for reducing the spread of the virus.

Sayegh was brought on the television show to discuss the success of the Paterson Strike Team. Paterson’s contact tracing team has been touted as a national model for other cities.

Number of new daily cases in Paterson has dropped since the start of May. On Thursday, Paterson had 50 new cases. In total the city has 6,087 infections with 307 deaths.