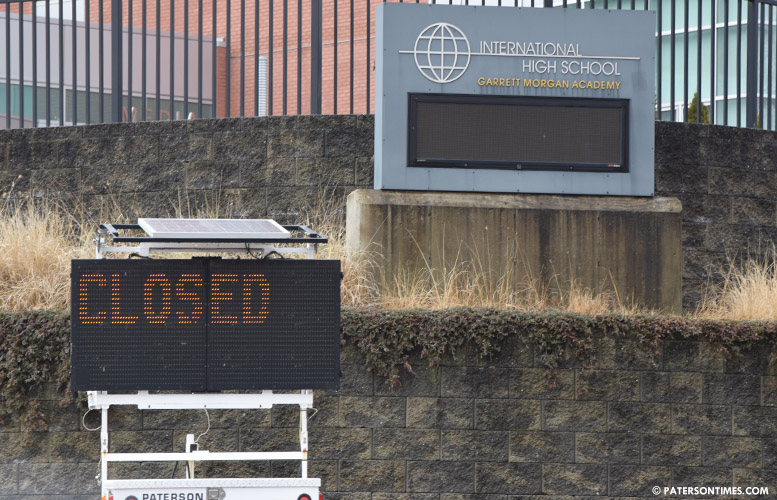 Municipal officials were forced to close the Covid-19 vaccination site at International High School for the second time after running out of vaccines.

Nurses at the site administered 929 vaccines on Friday. Hundreds of people formed a line that snaked around the high school on Grand Street even before the vaccination site opened.

A line formed outside of International High School on Saturday morning. Some erroneously thought the vaccination site was open despite a handwritten sign on the door and a digital board in front of the building stating the vaccination center is closed.

“There had to be 150 people if not more on line,” said Bernard Jones, a city resident, who went to the site on Saturday morning.

Jones said a typed sign on the building states the site is open Wednesday through Saturday. He waited for 45 minutes at the end of the line before people realized the site is closed because it ran out of vaccines.

Municipal officials said the New Jersey Department of Health supplied 2,000 vaccines last week. All of them were administered by Friday afternoon.

Mayor Andre Sayegh has urged governor Phil Murphy’s administration to increase the allocation of vaccines to Paterson. Paterson has been vaccinating everyone – including those from other cities and counties – at its vaccination site.

Health officials had put in a request for 7,000 vaccines for the upcoming week. They expect to receive 2,000 doses for first shots and 300 doses for second shots.

“We just need the supply from the feds to meet that demand and it is becoming increasingly apparent that we are ready, but they are not,” said Murphy, referring to the federal government, during a Covid-19 briefing on Friday. “We need a complete transformation here in the number of doses that get manufactured and distributed.”

The state is getting 100,000 doses per week, said Murphy. He said 1.5 million New Jersey residents have registered for the vaccine.

“You can’t beg the people to take something and then not make it convenient,” said a frustrated Jones. The vaccination site was forced to close on Monday after running out of doses. It re-opened on Wednesday.

Health officials plan to make vaccination more convenient for residents by adding two concurrent lines beginning next week — one for residents and another for out-of-towners. Under a quarter of the vaccines administered at the site was given to Paterson residents. Majority of the people vaccinated are from elsewhere.

Health officials will resume vaccinating people at International High School on Wednesday morning. Passaic County is opening a mega site in Woodland Park on Wednesday to administer vaccines as well.