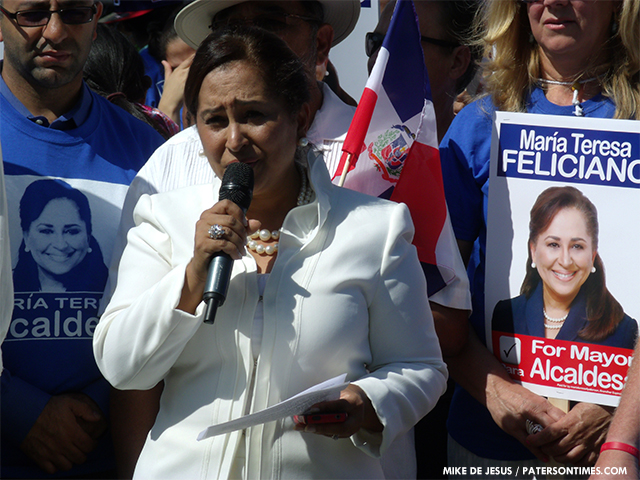 Minutes before the Dominican Day Parade, Maria Teresa Feliciano, vice president of the New Jersey Latino Leadership Alliance, and a group of her core supporters gathered near the corner of East 26th Street off Park Avenue on Sunday morning to officially declare her candidacy for the 2014 Paterson mayoral election.

Feliciano, 52, gave a brief speech in front of about 100 supporters — some were brought in from the yet commenced parade — that lightly outlined some of the core issues she wishes to tackle if elected. “The future of this city and our families will be on the line when we head to the polls next year on Tuesday, May 13, 2014,” said Feliciano. “Paterson faces pressing challenges in economic development, job creation, high crime, taxes, corruption, education, quality of life and more. It is critical that we come together to tackle these daunting challenges as a united front.”

During the three-minute announcement, Feliciano did not go into details of the challenges facing the city. She said, “Over the past year, I have visited and spoken with over 6,000 Patersonians, like you, who share my vision.” It remains unclear what her vision for the city is; however, Juan Jimenez, her campaign manager, has indicated that more information would be forth coming as the campaign swings into full gear.

In 2012, when the City Council was considering limiting business hours for certain businesses, Feliciano attended the council meeting with a group of small business owners, to voice concerns. She said in the meeting, “cities like New York, for example is [sic] now in the midst of successful crime reduction without cutting business hours.” In that same year, while working with the Dominican American National Roundtable, Feliciano introduced a proposal to curve out a Hispanic majority section of the city in the 4th Ward, by redrawing that section’s boundaries.

In the early part of 2013, Feliciano was appointed to the New Jersey Civil Service Commission, a body that hears and rules on appeals filed by State, county and municipal civil service employees, by Chris Christie, governor of the state, after her organization endorsed the incumbent for re-election.

More than a handful of individuals have indicated their willingness to run for the mayor’s office in 2014, some of those who have decided include: Aslon Goow, former 2nd Ward councilman; Jeffery Jones, incumbent mayor; Jose Torres, former 2-term mayor; Rigo Rodriguez, councilman at-large; Lydia Robles, community activist; and David Gilmore, city activist. Others are considering tossing their hat into the race, among them, Andre Sayegh, 6th Ward councilman and current council president; Theodore Best, county freeholder; and few others.

Declaring her candidacy both in English and Spanish, Feliciano said, “If you join me in this fight, we can restore Paterson!”