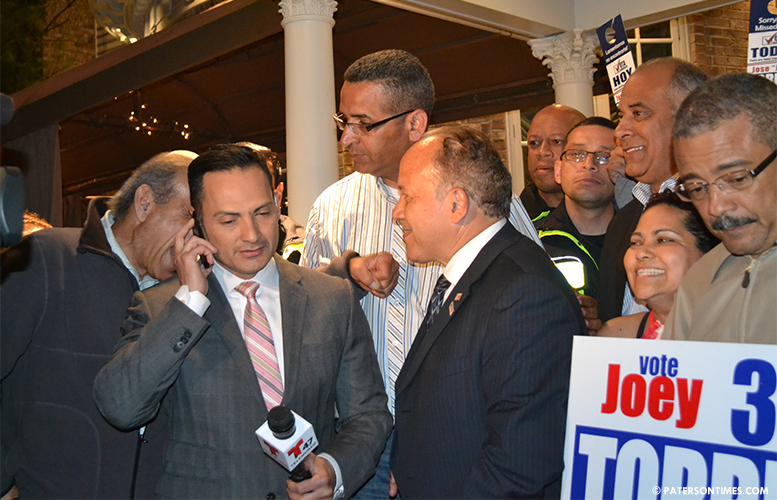 Torres beat well-funded city council president Andre Sayegh to re-capture the city’s high office that he was forced to vacate four years ago when an upstart Jeffery Jones, incumbent, completed an upset against the then mayor.

“I know the task is going to be monumental, but I’m up for the challenge,” said Torres on Tuesday night. Standing outside the Brownstone on West Broadway, the mayor-elected alluded to the mess that will be left behind by the current administration that he will inherit and must address.

Torres said his experience working as a business administrator in Jackson Township will be exploited to benefit city residents.

Jones, a former marine, has been an easy target for the seven candidates who ran for office. The incumbent’s administration has been plagued by multiple scandals: Hurricane Irene overtime, un-plowed streets and salt shortages after a heavy winter storm, and ubiquitous potholes that went unaddressed since 2013.

For much of the race, insiders figured the battle would be between Sayegh and Torres with the other candidates riding along. Sayegh received thousands of dollars from big money donors connected to the Democratic Party allowing him to run a high profile campaign that included a negative television advertisement on cable networks; the 6th Ward councilman also received high caliber consultants.

Before a final tally of the results, the 6th Ward councilman conceded defeat.

Omar Rodriguez, campaign manager to Torres, said the first thing the mayor-elect will do in office is execute and speed up the property re-evaluation process to reduce tax burden on city taxpayers.

“The 900 homes that are abandoned he will try to sell them for $30,000 each piece, so it will create $27 million,” said Rodriguez. Torres will then use that amount to give out loans at reduced interest rates for the buyers to refurbish the homes.

“The Democratic Party: Currie and Pascrell went too far,” reasoned David Gilmore, one of the eight candidates who ran for the mayor’s office, who was at hand outside the catering hall. “They can blame themselves. The people have spoken, and they’re in trouble.”

Gilmore explained Sayegh’s defeat as city residents punishing the Democrats for overreach in their effort to support the council president. Unofficial results released by the Passaic County Clerk’s Office shows Torres with 8,069 and Sayegh far behind with 6,516. Aslon Goow, former 2nd Ward councilman, came in third with 2,028.

Jeffery Jones, an embattled incumbent, a city mayor under whose term taxes spiked every year while services diminished, received a paltry 1,704 votes, landing 4th place. Donna Nelson-Ivy, director of the city’s health department, received 791; David Gilmore, city activist, who numerous times has said he was more about the issues and less about clenching victory, received 253.

“This time around you’re going to see experience at work,” said Torres. At 11:30 p.m. lights at the Jones’ headquarters were off.