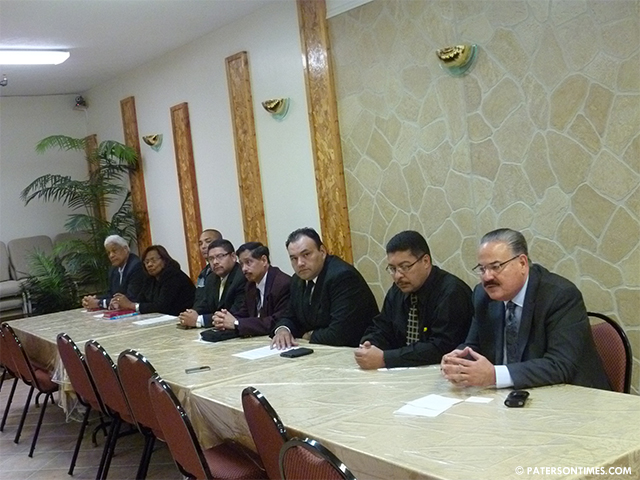 A group of seven pastors from various Hispanic churches around the city launched the Latino Pastors’ Association of Paterson, a civic organization, on Tuesday morning. Main aim of the association, according to Fabio Sosa, the president, is to foster a sense of common cause between the disparate ministries.

A statement released by the organization read “over twenty” churches signed up to join the association; however only seven pastors attended the event, among them, Miqueas Nieves, senior pastor at the Iglesia La Gran Comision on Marshall Street, who said, “I don’t mind working with politicians.”

Nieves said, as long as the association wishes to lift people up and better the community, he is willing to help and work with them, but that is where it stops: he does not wish to get his church involved in the murky business of politics. “I don’t care about politics,” said Nieves.

Other pastors uttered the same reaction when faced with political questions and their willingness to take sides in elections. Politics was visible in the conference room on the lower level of the Radio Visión Cristiana building on Broadway, where Maria Teresa Feliciano, a mayoral candidate, spoke to some of the pastors. Feliciano said, it is a civic organization.

The association seeks to create a network of Hispanic churches in the city, who can influence “policy making at legislative, executive and civic levels in our city, state and nation,” according to Alejandro Benjamin, one of the founders of the association.

Miguel Rivera, president of the National Coalition of Latino Clergy and Christian Leaders, a national organization that has been fighting the draconian anti-immigration laws in Arizona. “Our main purpose is to give a voice to the Latino churches,” said Rivera. “We need to empower our communities, and local pastors’ associations gives that empowerment.”

Rivera said, he wants religious leaders of all stripes to play a bigger role in their communities; he said, he wants to see imams, rabbis, and pastors, in the school system, not to teach religion, but to work in tandem with counselors and teachers. “We want to be engaged,” said Rivera, who said the clergy working with politicians and teachers and others in the community can address a number of problems plaguing the city, including “high criminality.”

Although Nieves expressed reservation about involving his church in politics, Sosa, the association’s president, said he has no qualms about politics; and when asked whether the association will endorse a candidate for the next year’s election, he said, “Most definitely.”

Nieves, pastor at the Marshall Street church, said, “I am not going to use my church as a platform for politics.”