Dominican community struggling to have one mayoral candidate | Paterson Times 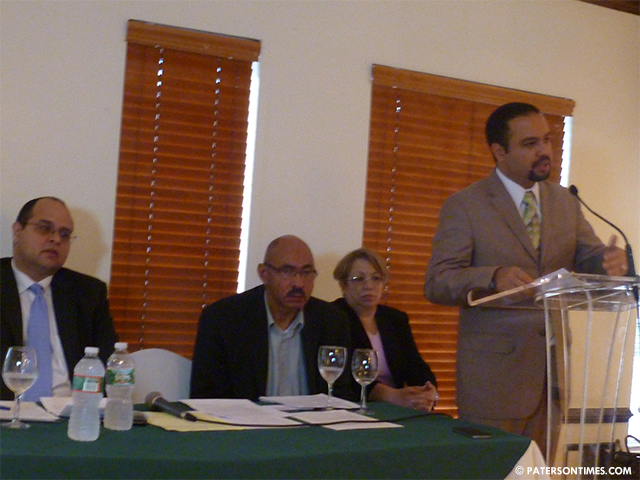 “If we have three candidates we’re going to go nowhere,” said Elsa Mantilla, during a meeting to clarify confusion surrounding the Paterson Dominican Council’s mayoral candidate for next year’s election.

The council was asked, during the summer, by the three Dominican-American candidates – Miguel Diaz, Maria Teresa Feliciano, and Rigo Rodriguez — who at the time were seeking to run for office in 2014 to determine the best candidate for the community. Someone the Dominican-American community in the city can back in unity.

After reviewing materials from all three candidates on a five category scale, the council settled on Feliciano, a decision Rodriguez described as “biased.” Rodriguez, councilman at-large and a mayoral hopeful, said he thought the vetting process would be good for the community, but he later realized the whole process was a sham.

“All of them said they had no objections” to the established criteria, said Lucilo Santos, one of the seven. Santos stated that there was a little reservation by Rodriguez when it came to the survey portion of the criteria – it must have been difficult for him to imagine Feliciano, who is practically unknown in the city, was on the same popularity level as him. “I did not sign the criteria agreement,” said Rodriguez. The council promulgated a Spanish language document that showed the councilman’s signature agreeing to a series of statements.

Each candidate was forced to sign documents vowing that whatever decision the council reaches the three would respect and abide by it; however, Rodriguez, councilman at-large, refused to accept the council’s choice, stating the whole process was orchestrated, and he unwittingly signed a bunch of documents, without realizing the process was a sham.

Diaz accepted the council’s decision, and has stepped down from running for mayor.

“The process is questioned by Councilman Rodriguez,” said Ramon Pagan, one of the seven and a former close aide to the councilman. “Ramon is a good man, but he is being used by these people,” said Rodriguez. Pagan said, since all three individuals signed the papers, and agreed to whatever consensus that is to be reached, they ought to keep their promise.

Pedro Rodriguez, one of the seven, said he hoped the councilman will come to his senses and accept the consensus that was reached. “We will not tolerate any person to discredit the members of this process or this process,” said Pedro Rodriguez. The council cannot do anything legally to enforce the agreement despite the signatures that were placed on papers by all. “We cannot prevent him from running,” said Pagan.