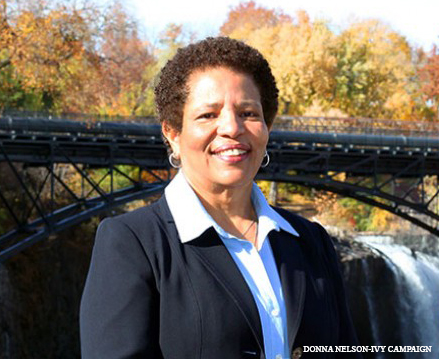 Donna Nelson-Ivy, the director of the city’s Department of Health and Human Services, has declared her candidacy for mayor in 2014, during a kick-off fundraiser on Thursday evening at the Masonic temple on Broadway.

Ivy, who was appointed by Jeffrey Jones, city’s mayor, to head the department, lists on her campaign site a list of her accomplishments. Among them, includes changing the name of her department “from human services to health & human services.”

There is also a plug on her previous work in Massachusetts: “In Springfield as the Area Director for the Commonwealth, she successfully managed a $26 million budget, supervised, mentored and supported 36 staff and ensured safe, effective and meaningful services were delivered to over 1200 individuals and/or family members.”

Jones when asked why a subordinate of his is attempting to snatch his job, often says, if someone wishes to run, they have the freedom to do so. Ivy attended the city’s public school system, going through primary in School 6, School 6, and attended John F. Kennedy High School.

After Kennedy, Ivy attended college in New Jersey and then Massachusetts. “She received her Bachelor of Arts degree from Ramapo College of New Jersey and Master of Education degree with a Management major from Cambridge College, Cambridge, MA,” according to her campaign site.

A large number of individuals have come forward with hopes to succeed Jones in 2014. Aslon Goow, former 2nd Ward councilman; David Gilmore, an activist and a vocal critic of Jones’ administration; Rigo Rodriguez, councilman at-large; Lydia Robles, an activist; Maria Teresa Feliciano, vice president of the New Jersey Latino Leadership Alliance; Jose Torres, former 2-term mayor of the city; Linton Gaines, who served as an aide to Jones during his campaign; Theodore Best, county freeholder. Andre Sayegh, the 6th Ward councilman, is speculated to run next year, but has yet to announce his candidacy.

There have been consolidation plans by Blacks and Hispanics to reduce the number of candidates running in order to improve their chances of holding office. Leaders from the African-American community set down to see whether one candidate could be set forward to run for mayor rather than the current four, who will divide up the vote and squander chances for the African-American community to hold onto the mayor’s office. From the current list it appears an agreement was not reached.

Similarly, Dominicans met behind closed doors to determine a candidate who will represent their community come 2014, but that too failed to produce the desired results. Paterson Dominican Council, a political organization representing the Dominican community, went through a list of three candidates — Miguel Diaz, Feliciano, and Rodriguez – settling on Feliciano. Rodriguez called the process illegitimate and continued his campaign to win the office next year.

Both communities’ lack of unity has created a large field of candidates who will divide up the votes resulting in either Jones continuing or Torres recapturing his position at the City Hall. Goow has repeatedly called for run-off elections to ensure that neither Jones nor Torres “sneak back into office.”

With two other female candidates running Ivy hopes to become the first woman mayor of the city. “Currently she is looking forward to becoming Paterson’s first African American female Mayor, in May 2014,” according to her campaign site.