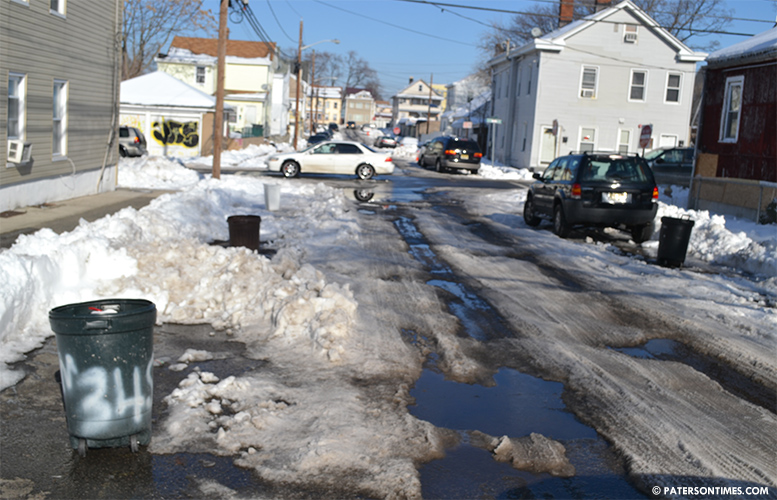 With many of his streets still untouched by plows, Mohammed Akhtaruzzaman, the 2nd Ward councilman, called on the mayor to seek assistance from other towns in removing snow and salting the streets.

“It was worthy advice,” said Jeffery Jones, the city’s mayor. “They’re dealing with their own salt issues and snow removal issues.” The mayor said he contacted Hawthorne, Clifton, Passaic, Fair Lawn, and Haledon.

The mayor did reach out to surrounding towns in the afternoon. “He was looking for a piece of equipment,” said James Anzaldi, the mayor of Clifton. Jones was looking for heavy duty snow plow, said Anzaldi.

The mayor of Clifton referred Jones to Matthew Wilkins, Clifton’s city manager, who has the authority to loan equipment. Wilkins said he had a voice mail from Jones, and he was planning to call back after this reporter’s inquiry.

“I have to call him,” said Wilkins. When asked whether his town can lend the city assistance by providing the requested tools in its time of need, Wilkins said, “That’s not appropriate for me to answer right now. I’m going to have to talk to the mayor first.”

Henry Street in the city’s 2nd Ward remains untouched by plows since the storm.

Jones took the advice and received mixed results with some towns agreeing to work with the city’s public works department to coordinate efforts and others not having the means to help.

“The major roads were done the first day,” said Jones. “It’s the side streets where cars were double parked and people were throwing snow back into the streets” were the issue, said the mayor.

“We’re still waiting for parts of our salt order to come in,” said Jones. “We’re not the only ones, other cities are waiting too.” Jones said the city had ordered salt prior to the storm through the Passaic County Cooperative, but the deliveries were not made in a timely manner, leaving the city without salt when more than a foot of snow came down earlier in the week.

“We’ve already started looking at outside contractors,” said Jones. ”We do have an emergency condition.”

When told of Clifton’s lukewarm response, Akhtaruzzaman said, “You know, you try.”