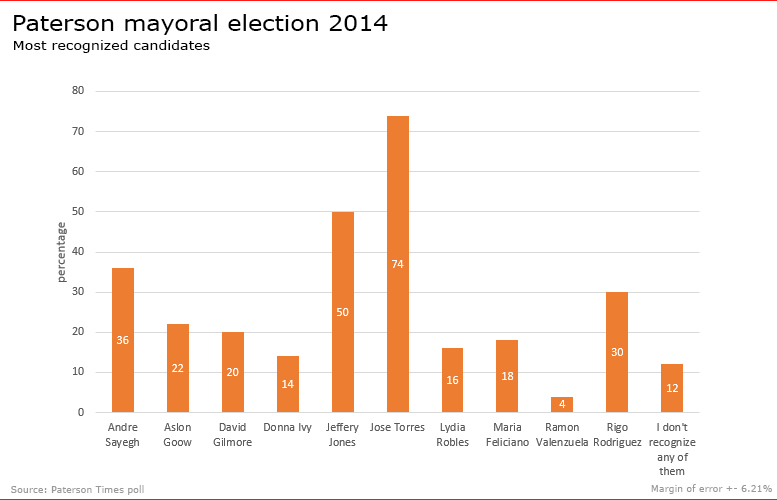 When it comes to name recognition insiders have the lead with Jose Torres, the city’s former mayor, Jeffery Jones, the current mayor, and Andre Sayegh, the City Council president, topping the list, according to a survey completed by the Paterson Times.

Being in office for almost a decade, Torres left behind an easily recognizable name as the survey demonstrates with 74-percent of registered voters being aware of the former mayor. Similarly, Jones, having held office for the past four years has managed to garner considerable name recognition: 50-percent of voters know of him.

Sayegh, who has been council president since last summer, has managed to use his council seat to build awareness with voters. Rigo Rodriguez, councilman at-large, has been doing the same at the council: attacking issues that are an anathema to voters – tax hikes — and supporting populist positions – building a hotel in the 2nd Ward and restoring Hinchliffe Stadium.

Aslon Goow, the former 2nd Ward councilman, comes in behind Rodriguez with 22-percent of voters recognizing him. Although out of office, Goow is known for appearing before the council with his opinions on impactful issues. David Gilmore, an activist, who is a constant presence in council meetings, has managed to increase his exposure by delivering small speeches at the council’s televised meetings. 20-percent of registered voters recognize Gilmore.

The survey collected the opinions of 248 registered city voters from January 15th to February 15th, 2014. Each voter was allowed the opportunity to select more than one candidate, check marking every name each recognized.

Does name recognition mean support at the ballot box?